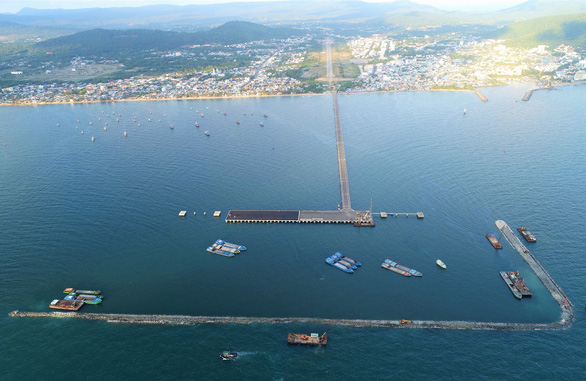 A project carried out since 2015, the Phu Quoc International Passenger Port in the island city of Phu Quoc is on track to become the first multipurpose seaport of international quality in Vietnam.

About 90 percent of the workload on Phu Quoc International Passenger Port has been completed, with the breakwater being 80 percent done, according to leaders of contractor Portcoast, one of Vietnam’s leading names in port and coastal consulting.

Engineers and construction workers are scrambling to finish the remaining components, including marine signaling devices, to complete the project within the third quarter of 2021.

During an earlier assessment of the feasibility of the port, the Vietnam Maritime Administration pointed out Phu Quoc’s ample potential to become a destination for leisure voyages, as it is on the routes of 19 passenger ship companies that operate 34 vessels to provide 113 tours connecting Singapore, Thailand, Vietnam, and Northeast Asian nations

The island, administered by Kien Giang Province, has not been able to leverage the potentiality in the absence of an international seaport in the area.

Capable of handling high-tonnage charter and cruise ships, the Phu Quoc International Passenger Port is expected to stimulate socio-economic development in the island city and Kien Giang Province in general.

The port is built on a plot of 180 hectares in the city’s Duong Dong Town, including a 240-meter-long wharf, a 1,004-meter-long bridge that connects the wharf to the beach, a 850-meter-long breakwater, a passenger terminal, and other necessary facilities.

It is designed to handle international liners carrying 5,000-6,000 passengers, as well as cargo vessels and defense ships.

The project is estimated to cost VND1.645 trillion (US$71.6 million), with VND647 billion($28.1 million) to come from the local budget, while the remaining VND493.4 billion ($21.45 million) is funded by Phu Quoc Tourism Development and Investment JSC via a BOT (build-operate-transfer) contract.