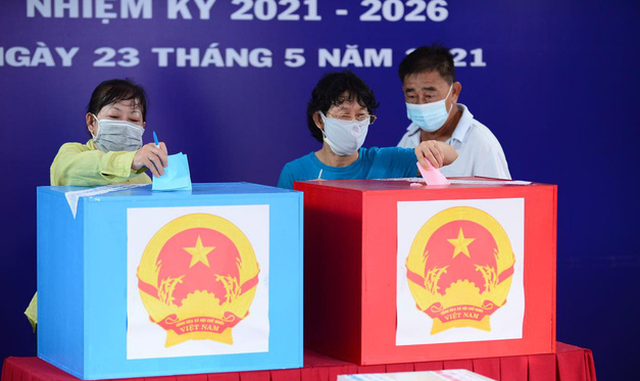 Many provinces in Vietnam had turnout rates of more than 99.9 percent in the election of deputies to the 15th National Assembly and members to people’s councils at all levels for the 2021-26 tenure.

As of 10:00 pm on Sunday, over 67.6 million out of 68.7 million voters had cast their ballots in the five-yearly polls, equivalent to 98.43 percent, the National Election Council quoted reports from 44 out of 63 provinces and cities in the country.

The Mekong Delta province of Hau Giang has a turnout rate of 99.99 percent, which is the highest, followed by Tra Vinh and Lao Cai Provinces with 99.98 percent.

Most election teams reported that the election had concluded at the promulgated time, which was 7:00 pm, while some ended the vote later at 9:00 pm.

The teams are promptly counting the votes in order to report the results to the National Election Council.

Strict COVID-19 prevention and control measures were taken at all polling stations, with voters required to wear face masks, have their body temperature measured, fill in health declarations, and keep a safe distance from one another.

All ballots and ballot boxes were thoroughly disinfected.

Nearly 69.2 million people in 63 provinces and cities have the right to cast their votes during this term’s one-day election, according to statistics from the Vietnam News Agency.

Although the official election day was scheduled to begin at 7:00 am on Sunday, early voting had been permitted in a number of constituencies in a total of 16 cities and provinces.

A total of 866 candidates, including 203 from central agencies and 663 from localities, run for 500 seats in the 15th National Assembly.