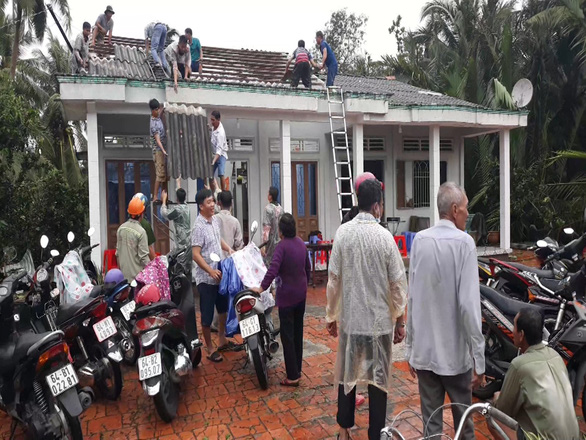 Whirlwinds coupled with heavy rain on Tuesday swept through various residential properties in the southern Vietnamese province of Vinh Long with as many as 30 houses heavily destroyed, local authorities estimated.

As witnessed by Tuoi Tre (Youth) newspaper reporters, dozens of houses in Mang Thit and Long Ho Districts had their roofs blown off during the whirlwinds.

Tran Nhat Thanh, a resident in Thanh Binh Village of Mang Thit, said the wind blew the roof of his five-year-old house away, inflicting significant damage.

By late Tuesday afternoon, rain and wind had waned, leaving behind several uprooted coconut trees in Thanh Binh and nearby Than Binh Village.

At the same time, officials and police officers showed up to help locals pull down houses destroyed in the storm, Le Thanh Sang, deputy secretary of the Thanh Binh Party Committee.

As heavy rain may persist, Vinh Long authorities are organizing manpower to document property damage, helping households move out of ravaged houses, as well as arranging shelters for them.