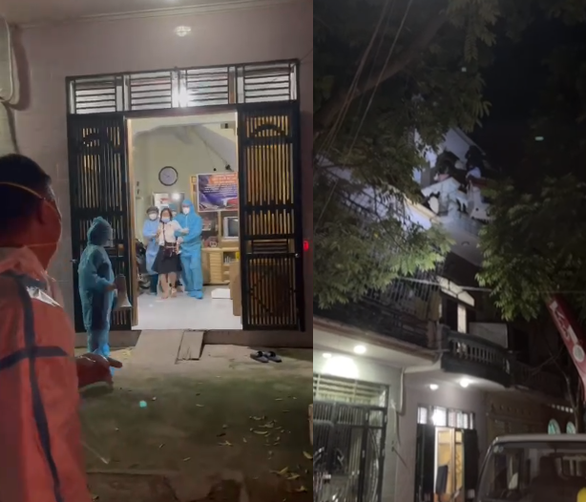 Government agencies in northern Vietnam's Bac Giang City have eventually taken a local woman who is a close contact of a coronavirus patient to a quarantine facility after forcing her out of her residence this week.

The woman, 44-year-old Pham Thi Q., was taken out of her house and sent to a centralized quarantine site on Wednesday, authorities in the city’s Tran Nguyen Han Ward reported.

Local authorities said they had sent staff to Q.’s house to ask her to make a medical declaration after she was determined to be one of the close contacts of an infected patient, but she did not follow the request.

The case was reported to the city’s government and police, so the local People’s Committee later issued an order to place the woman under concentrated quarantine.

A vehicle was then sent to her house, where local authorities, including police, repeatedly requested the woman to get out but Q. kept staying on the third floor.

Officials therefore used a ladder truck to approach Q. and demanded that she comply with epidemic prevention rules, but she insisted on not leaving her home.

Eventually, local authorities decided to break open the door of the house and escorted her out.

This incident occurred amid an escalating outbreak in Bac Giang Province, which is topping the list of 30 provinces and cities that have reported 3,105 local coronavirus infections since April 27, which marked the beginning of the ongoing fourth wave.

The province has documented 1,564 patients in this round. Bac Giang City is the capital of Bac Giang Province.

In its report at noon on Thursday, the Ministry of Health recorded 53 new domestic cases, of which Bac Giang accounted for 21.

The country has so far recorded 6,164 cumulative COVID-19 patients, including 2,853 recoveries and 45 deaths.