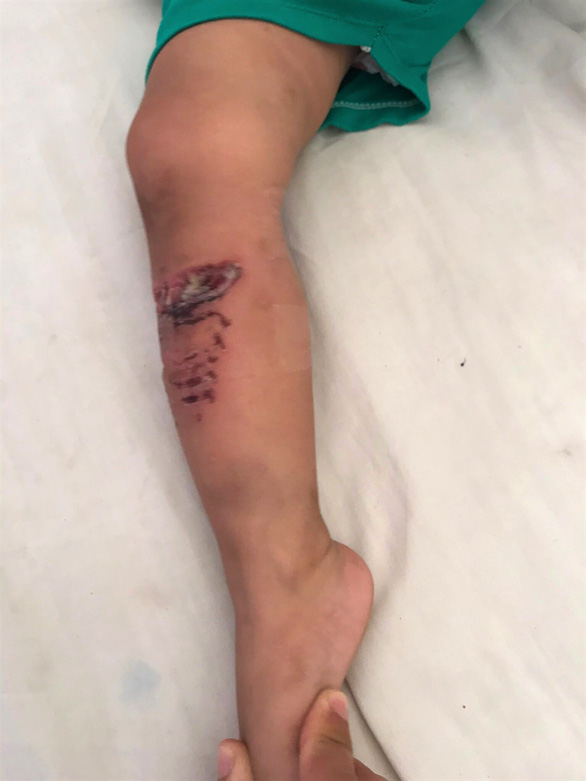 A 28-month-old boy was rushed to a hospital in Vietnam to treat multiple lacerations caused by a pit bull earlier this week.

The boy, named T.H.M.K., from south-central Khanh Hoa Province, was hospitalized on Wednesday with deep open wounds and infections from the dog’s bites, said Dr. Pham Dinh Thanh, head of the traumatology and orthopedics department under the provincial general hospital.

K. received jabs against rabies while having his wounds dressed and necrotic skin removed.

His condition has greatly improved, but he is still in panic, doctors said.

This is the first pit bull attack the hospital has handled, they added.

The dog bit K.'s leg at around 10:00 pm on Tuesday, according to the patient’s caretaker.

Meanwhile, his father, Truong Hoang Hai, who was with K. at the time, got one of his finger knuckles bitten off after he tried to open the dog’s jaws to rescue his son.

The dog only gave up after its owner, who is Hai's neighbor, arrived and pulled him away.

After getting his wound bandaged, Hai was sent to the same hospital as his son.

Hai was discharged after his severed knuckle was stitched back on, but his son is still at the hospital for further monitoring.

In light of the case, Dr. Thanh warned the community of the risk of dog attacks.

“Households with dogs of ferocious breeds, namely pit bulls and German shepherds, should lock them up," he said.

"Otherwise, they should only be able to run free with a muzzle on.

"People bitten by dogs should get jabs against rabies as soon as possible.”

Dr. Thanh also advised adults to watch their children while they play outside.

When they get bitten, parents should give them proper first aid and promptly send them to the hospital.

In Vietnam, pet pit bulls have been reported over many aggressions against humans for the past few years.

Last week, another pit bull was put down after fatally attacking a person and injuring his owner in the Mekong Delta.