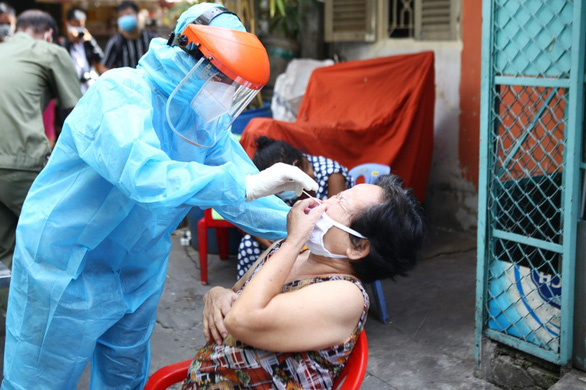 The Ministry of Health has documented 200 coronavirus cases linked to a religious mission in Ho Chi Minh City since late last month, according to the municipal Department of Health.

The ministry has registered 208 patients in the city since April 27, when Vietnam’s fourth coronavirus wave erupted, Nguyen Tan Binh, director of the health department said at a meeting on Tuesday.

Two hundred of the cases were traced back to Revival Ekklesia Mission, a Christian congregation based in Go Vap District, which is largely isolated now, Binh elaborated.

Twenty out of the city’s 22 districts have recorded infections in this round, he said, adding Go Vap has confirmed 52 cases. The virus has also spread to some other provinces in southern Vietnam.

The wife of a priest in the mission, whose infection chain was first detected on May 26, had traveled to Hanoi, a major cluster in northern Vietnam, from April 23 to 29, according to a contact tracing report by the Ho Chi Minh City Center for Disease Control.

She showed respiratory symptoms on May 13 while the Revival Ekklesia Mission held a gathering on May 16.

The woman, 65, treated herself at home and did not report her symptoms to local medical authorities as required by COVID-19 control regulations.

Health authorities then found her in the infection chain when the first case of the mission was logged.

She is being treated at the Ho Chi Minh City Hospital for Tropical Diseases.

City police have been probing the mission for “spreading infectious diseases to others.”

The three chains have been well contained as no more transmissions from them have been confirmed since May 25.

City health workers have found both the UK and Indian variants of the coronavirus in the patients of the four chains.

The city reinstated enhanced social distancing on Monday, slated to last for 15 days. Non-essential businesses have been closed while the elderly are advised to stay home.

The Vietnamese Ministry of Health on Tuesday morning confirmed 111 domestic COVID-19 cases, including 51 in Ho Chi Minh City, raising the country’s tally to 7,432, with 3,043 recoveries and 47 deaths.

Fourteen provinces have registered zero new cases in the past two weeks.

The Southeast Asian country has administered 1,102,099 coronavirus vaccine shots to medical staff and other frontline workers since it rolled out inoculation on March 8.