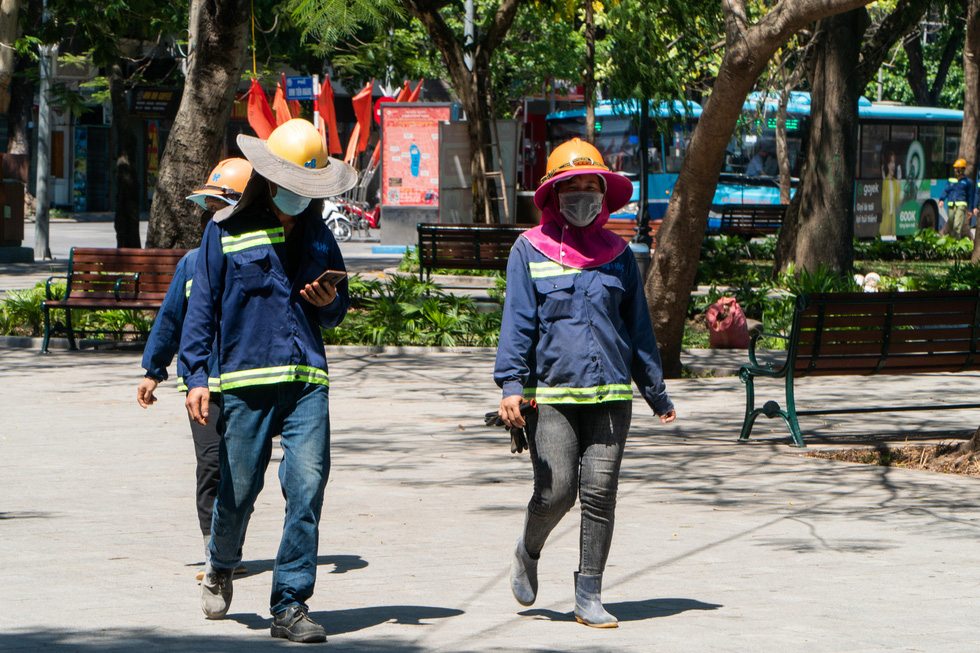 People struggle as temperatures rise over 50 degrees Celsius in Hanoi

People in Hanoi, especially those working on the streets, have braced for the hottest days since early June, with the temperature on road surfaces exceeding 50 degrees Celsius at noon on Sunday.

The temperature on the road surface soared over 50 degrees Celsius at noon on Sunday.

In the midst of the sweltering summer heat, many workers struggled to earn their living on the streets.

Vu Thi Phuong, a 40-year-old dweller from northern Ha Nam Province, still pedaled her old bicycle along the almost-empty Hang Bong Street at noon on Sunday when most people preferred staying home to avoid the sun.

Her bicycle carried a cooler box storing tao pho, or tofu in sweetened soup with or without ice, which Phuong sells to gain daily income.

“It’s been so hot these days that the sunlight reaching my back when I’m cycling makes me feel like it’s burning my skin,'' said the woman, who spends her day on the street from 9:00 am till evening.

“Despite that, I have to keep working, or else my children won’t have anything to eat."

Whereas Phuong tries to take advantage of people enjoying a portion of tao pho with ice during these hot days, many restrictions to prevent the spread of COVID-19 have led to lower demand compared to normal.

Pham Quang Hop, a 64-year-old man from north-central Thanh Hoa Province, works as a security guard for a store in Hoan Kiem District, spending eight hours outside every day despite the scorching temperature of over 40 degrees Celsius.

“These days, the sunlight is terrible,” Hop said.

“I still have to work hard, especially in this pandemic when it’s luck to still have a job.

“I turned on the fan but it just made me feel hotter because the air was basically not cool.”

Due to the influence of the hot low-pressure area from the west combined with the strong Foehn wind effect, the high temperatures, commonly at 39-41 degrees Celsius, are forecast to hammer Hanoi through Monday.

The temperature hovers above 35 degrees Celsius for ten to 19 hours every day on average.

The lowest relative humidity during this heatwave ranges between 40 and 50 percent.

The heat in the northern region is expected to decrease from Tuesday and end on Wednesday.