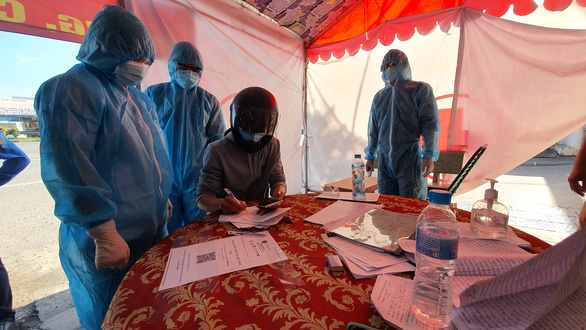 The disease control agency in Dong Nai Province, located in southern Vietnam, has requested people who once traveled to Ho Chi Minh City’s Hoc Mon Market to make health declarations after it found six suspected COVID-19 cases traced to the market, a new infection chain that will be locked down early next week.

In its request urgently released on Sunday, the provincial Center for Disease Control asked that all local people who have come to the market for shopping or transported their goods there from June 1 file their health declarations as soon as possible.

The request came after the center found out that six local people, five in Thong Nhat District and the other in Bien Hoa City, had been to this farm produce and food wholesale market before they became suspected COVID-19 cases.

Any local residents who have come into contact with suspected cases or who suspect themselves to have contracted the coronavirus should stay home and notify local health authorities for necessary instructions, the center required.

The provincial health authorities are currently coordinating with Thong Nhat District and Bien Hoa City to trace all contacts of the six suspects.

More suspected coronavirus cases linked to the wholesale market may be found in the coming time, authorities warned.

Bordering Ho Chi Minh City to the west, Dong Nai is now one of the country’s industrial hubs, with its 32 industrial parks employing around 620,000 workers.

As earlier reported, the Hoc Mon District People’s Committee has decided to temporarily suspend the operation of the market for one week starting from June 28 after the detection of 19 coronavirus cases there, along with some other infections in connection with other markets in the city.

In its Friday decision, the district government asked the market management board to disinfect the whole market and coordinate with local authorities and the municipal Department of Industry and Trade to set out specific plans in response to the pandemic when the market resumes operations.

In a report issued on Sunday noon, the Ministry of Health confirmed 76 new COVID-19 cases, all domestically infected, of which 65 were recorded in Ho Chi Minh City, which has recently led the country in daily new infections.

Since April 27, when the pandemic’s latest wave broke out in Vietnam, the country has documented 12,071 patients nationwide.