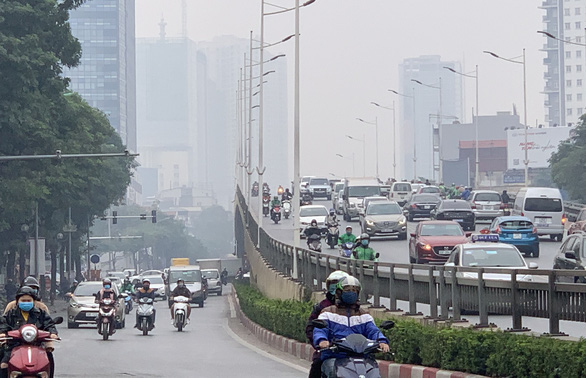 The result, announced in an online conference on Thursday, was drawn from a scientific report on the impact of fine dust pollution on public health in the Vietnamese capital, as measured in 2019 by Live&Learn Vietnam, the Hanoi University of Public Health, and the University of Engineering and Technology under the Vietnam National University (VNU-UET).

The report is described as the first to use locally provided data to evaluate the burden of disease on public health due to PM2.5 exposure in Hanoi, and was carried out within the Collective Actions for Clean Air project funded by the United States Agency for International Development.

Speaking at the conference, Dr. Nguyen Thi Nhat Thanh from VNU-UET revealed that the annual average concentrations of PM2.5, or airborne particles that have aerodynamic diameters of 2.5 μm or less, in Hanoi's districts range between 28,15 and 39,4μg/m3, with such downtown districts as Dong Da, Ba Dinh, and Hai Ba Trung seeing more pollution than suburban ones.

However, the lowest PM2.5 concentration in the city, recorded at 28,15 μg/m3 in the mountainous district of Ba Vi, is still higher than the upper limit of 25 μg/m3 in the national air quality standard.

Such a level of pollution is taking a toll on public health in the capital, as pointed out by a finding on deaths attributed to PM2.5 exposure among local residents in the research.

More specifically, PM2.5 exposure was attributable to 2,855 premature fatalities, equivalent to around 35.5 premature deaths per 100,000 people and accounting for 12 percent of the total toll in Hanoi residents aged 25 and above, Dr. Do Thi Trang Nhung from the Hanoi University of Public Health pointed out.

Consequently, the total years of life lost due to PM2.5 exposure was 79,933 years and the loss of life expectancy was 908 days, equivalent to 2.49 years.

If it had not been for the PM2.5 pollution, the average life expectancy of Hanoi residents could have been 81.49 rather than 79 as of today, Dr. Nhung indicated.

Based on their findings, the researchers provided a series of recommendations for policymakers, which include establishing and implementing an inter-sectoral emergency plan with health protection guidelines and emission control measures, an air quality forecasting and air pollution early warning system, and awareness-raising campaigns of the current status of air quality, to respond to high levels of air pollution.

A representative of the Hanoi Department of Resources and Environment affirmed that the city has made many attempts to improve local air quality, including the curb of straw burning and charcoal stove usage.

However, they have not achieved much success in changing the public’s behaviors.

In 2020, air quality in the Vietnamese capital ranked the 12th worst among cities in the world, despite seeing an eight-percent reduction in PM2.5 levels compared to the previous year, said IQAir, a Swiss air quality technology and monitoring company in their report released in March.