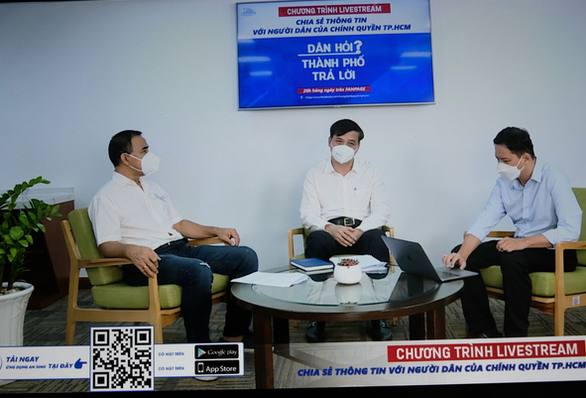 Delivery workers will be permitted to travel among different districts in Ho Chi Minh City, the city’s deputy leader said on Monday.

The statement was made by Le Hoa Binh, deputy chairman of the Ho Chi Minh City People’s Committee, during a Q & A session on epidemic prevention and economic recovery, which was broadcast live on Facebook and garnered 14,000 inquiries from residents.

Binh stated that delivery workers will be allowed to travel cross-district from Thursday, provided they meet epidemic safety requirements.

Free testing for delivery workers will also be provided in the following weeks, he added.

Since July, the municipal administration had banned inter-district delivery service and limited the operation to some districts only to curb the spread of COVID-19. Last month, the service was resumed in eight districts previously considered as high-risk areas.

The deputy chairman also disclosed more details on a three-stage road map to reopen the local economy that local authorities had announced.

According to Binh, the first phase, which allows selected services to reopen to vaccinated or tested residents, will be piloted in District 7, Cu Chi District, and Can Gio District from September 16 to 30 before being applied citywide until the end of October.

As Binh sees it, local authorities do not wish to escalate social distancing any further, and the success of the two-week pilot will play a vital part in loosening the current restrictions.

“We believe that our city will be able to control the disease,” Binh said.

Addressing the eligibility criteria for a local worker to return to his workplace, Binh pointed out that the safety of the worker’s destinations is an important factor and the vaccination status by itself is not sufficient.

He also revealed that the city is testing a tech solution during the upcoming tryout, which helps streamline checkpoint procedures by allowing officials to cross-check a resident’s travel destinations and vaccination details at an instance.

He also recommended that migrant workers should remain in the city instead of trying to return home, as it will contribute to the common goal of pushing back the virus.

The city is devising safety measures to allow businesses to reopen in the forthcoming weeks, with a focus on eight sectors and four production methods.

Many enterprises have got their due dates for water and electricity bills delayed, Binh added.

The official said that the city will prioritize businesses in their administrative procedure processing, providing loans in as early as one week if the applicants meet all the requirements.

The third financial aid package of VND2.577 trillion (US$113 million), set to benefit households and informal workers impacted by the pandemic in the upcoming weeks, will reach all citizens, including those with temporary residencies, Binh confirmed.

Considering the shortcomings of the previous relief attempts, the city will send out relief money support via bank accounts and e-wallets this time.

They will also supply care packages with essential items worth VND2 million ($88) each to financially distressed households.