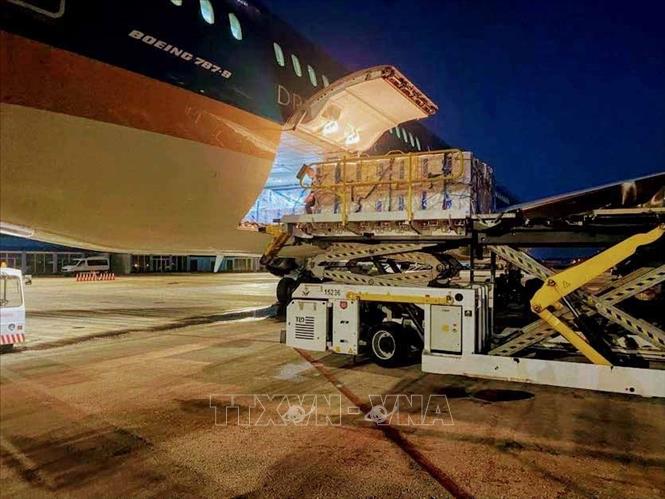 A special plane serving the overseas working trip by State President Nguyen Xuan Phuc and a high-ranking delegation of Vietnam is transporting 1.05 million doses of Abdala COVID-19 vaccine produced in Cuba to the Southeast Asian country.

Of the shipment, 900,000 doses came from the Center for Genetic Engineering and Biotechnology (CIGB) of Cuba, according to the Vietnam News Agency.

The center handed over the batch of the vaccine, which they developed and manufactured, to the Vietnamese Embassy in Cuba early on Friday (Cuba time).

On the same day, the Cuban Defense Ministry presented 150,000 doses of the same vaccine to the Vietnamese defense attaché in the country.

A special plane serving the overseas working trip by State President Nguyen Xuan Phuc and a high-ranking delegation of Vietnam is transporting all of the 1.05 million vaccine doses to Vietnam.

State President Nguyen Xuan Phuc made an official friendship visit to Cuba on September 18-20 and then travelled to the U.S. to attend the High-level Debate of the United Nations General Assembly’s 76th session (UNGA 76) and participate in a number of bilateral activities from September 21 to Friday.

During Phuc’s visit in Cuba, Vietnam’s Center for Research and Production of Vaccines and Biologicals (Polyvac) signed an agreement to purchase five million shots of the Abdala vaccine from the CIGB on September 20.

The Vietnamese Ministry of Health earlier granted conditional approval to the Abdala, the eighth after seven COVID-19 vaccines that have been given authorization for emergency use in Vietnam, namely the UK’s AstraZeneca, China’s Sinopharm, Russia’s Sputnik V, the UAE’s Hayat-Vax, and three U.S. jabs including Pfizer-BioNTech, Moderna, and Johnson & Johnson.

As of late Thursday, Vietnam had administered roughly 37 million COVID-19 vaccine doses, with over 7.2 million people having been fully vaccinated.

Health authorities aim to immunize at least two-thirds of Vietnam's 98-million population against COVID-19 by the first quarter of next year.