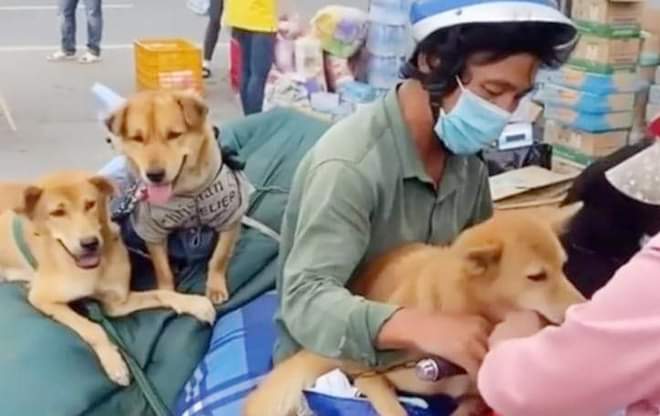 Local public has voiced anger and objections against a decision of health authorities in the Mekong Delta province of Ca Mau to cull 13 dogs belonging to a married couple returning from Long An Province after the owners were found positive for COVID-19.

The administration of the southernmost province has required relevant agencies to make a detailed report on the killing, which was decided by local health authorities in Tran Van Thoi District when the dog owners were receiving treatment.

The Department of Health is requested to coordinate with the Department of Agriculture and Rural Development and the district government to collect information regarding the incident, the provincial People’s Committee announced on Sunday.

A detailed report must be submitted to the provincial administration and provided to the press prior to 10:00 am on Monday.

According to preliminary information, Pham Minh Hung, 49, and his wife began traveling from southern Long An Province to Ca Mau Province on Friday.

Hung previously worked as a mason in Long An, but his livelihood was negatively affected by the COVID-19 pandemic.

He and his wife thus decided to head to a relative’s house in Ca Mau as travel restrictions were relaxed early this month.

The couple traveled on a motorbike and brought along 15 dogs, including 11 puppies. They later gave away two of the pups.

After arriving at Tran Van Thoi District, Ca Mau Province, the couple and their dogs were taken to a quarantine center at a local high school.

At around 1:00 am on Saturday, the couple’s rapid COVID-19 tests came back positive.

Both of them were then transferred to Tran Van Thoi General Hospital for treatment.

While they were treated at the infirmary, several people in charge of COVID-19 prevention and control in the district convinced Hung and his wife to allow the culling of their dogs, fearing the animals also carried the virus, Ho Thien Chua – chairman of the People’s Committee in Khanh Hung Ward, Tran Van Thoi District, told Tuoi Tre (Youth) newspaper.

Those involved in the incident have been requested to give details on why and how the dogs were culled, Chua added.

Earlier, the photos and videos of Hung, his wife, and their 15 dogs struggling on a motorbike during their long journey went viral on social media and touched the hearts of many animal lovers.

Therefore, the killing has stirred up an uproar across social media, with many people saying the decision is unscientific and too cruel.