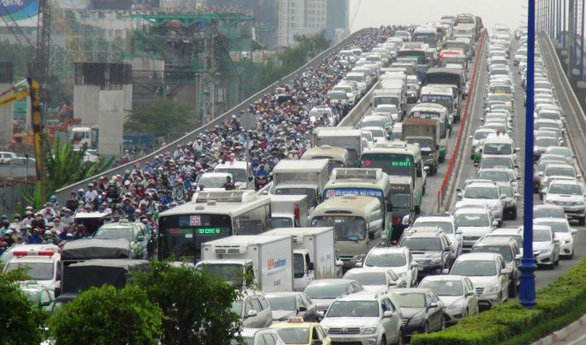 Authorities in Ho Chi Minh City are considering a plan to collect tolls from cars entering the downtown area as part of efforts to encourage the use of public transport, reduce traffic congestion and air pollution at major streets.

The Ho Chi Minh City Department of Transport has presented to the municipal People’s Committee a toll collection plan to restrict the number of four-wheel vehicles, which will be implemented under the build-lease-transfer (BLT) format as proposed by the city-based Innovative Technology Development Corporation (ITD).

BLT is a form of procurement in which a private contractor builds (and finances) a project on behalf of a public sector partner (or client) and then leases the project back to the client for a predetermined period.

The installation of the tool booths will not require site clearance on those streets.

The investment in the project is estimated at VND2.27 trillion (US$99 million).

The transport department has sought the municipal Department of Planning and Investment’s approval for ITD’s proposal via the municipal People’s Committee.

In 2010, the city administration agreed at the company’s proposal to collect fees from autos that enter the city’s downtown area.

Two years later, a complete plan, costing around VND1.2 trillion ($52.33 million), was sent to the city authorities for approval, but it has been put on hold since then due to many objections from experts and the public, whose greatest concern was whether the plan would be successful in reducing traffic jams or it would only benefit certain businesses, according to news site VnExpress.

The municipal People’s Committee then approved another plan to strengthen public passenger transport in combination with controlling private vehicles, with the toll collection on cars entering the city center projected for the 2021-25 period.

By mid-September, nearly 8.4 million vehicles had been active in Ho Chi Minh City, including more than 806,000 cars and about 7.6 million motorbikes, according to VnExpress.

Compared to the same period in 2020, the number of newly registered cars increased by nearly 3.8 percent and motorbikes by 3.3 percent.

In the first nine months of this year, an average of 109 cars and 438 motorbikes were registered every day.