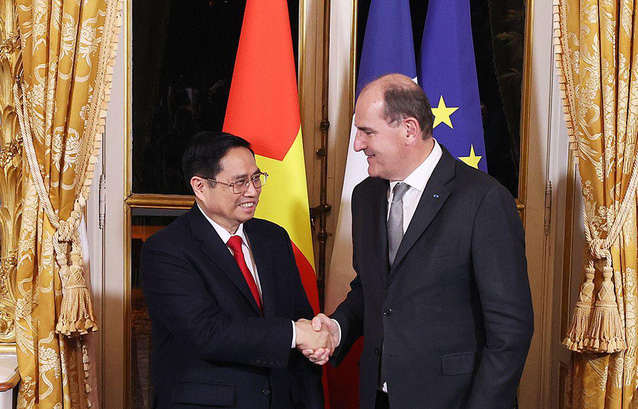 PM Chinh joined talks with PM Castex at Hôtel de Matignon in Paris on Wednesday (local time) as part of his official visit to France from November 3 to 5.

The two leaders praised the close relationship between the two peoples as well as the extensive and diverse development of the two nations’ strategic partnership.

On behalf of the Vietnamese government and people, PM Chinh thanked the French government for supporting Vietnam in its pandemic prevention and control efforts.

He also expressed his hope that France continues to share its experience, transfer vaccine production technology, and help Vietnam train medical personnel and adapt to life with COVID-19.

Both sides discussed plans to elevate the Vietnam-France relationship on the occasion of the 50th anniversary of the two countries’ diplomatic ties in 2023.

The leaders also discussed regional and international issues of shared concern, including the situation in the East Vietnam Sea.

As of Wednesday, Vietnam had received more than 113 million doses of COVID-19 vaccine from contractual purchase, the COVAX Facility, and donations from other countries, according to the Ministry of Health.

About 34 million more jabs are expected to arrive in the country this month.

Vietnam has administered over 85 million vaccine doses since inoculation was rolled out on March 8.

About 25 million people have been fully inoculated, accounting for 35 percent of the country’s adult population.