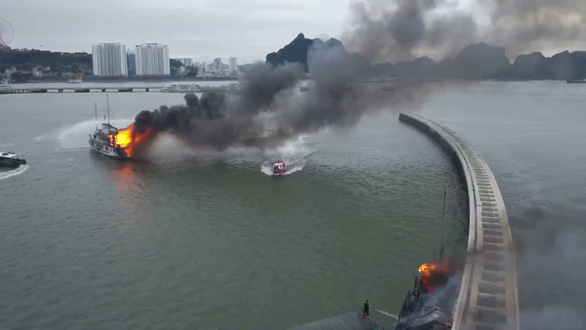 Two cruise vessels caught fire while they were anchored in Ha Long Bay off the northern Vietnamese province of Quang Ninh on Monday.

The two ships were moored near Ha Long International Cruise Port when the fire broke out.

There were also no passengers on the two vessels at that time.

Both of the cruise ships came from another locale and were not registered to operate at Ha Long International Cruise Port, according to the port authorities.

The authorities mobilized firefighting forces and specialized ships to coordinate with local functional forces and a number of nearby ships to put out the fire.

The blaze was extinguished after several hours, but it already badly burned the ships, causing an estimated loss of billions of Vietnamese dong. (VND1 billion = US$44,100)

Functional forces are identifying the two ships in question, as well as investigating the cause of the incident.