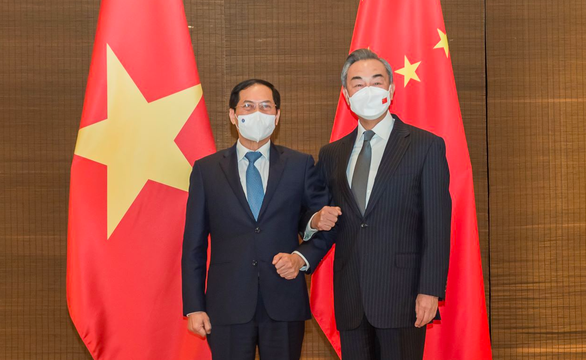 -- China will provide US$3.1 million for Vietnam to buy medical supplies to fight COVID-19, along with 500,000 vaccine doses for Vietnamese localities, Chinese Minister of Foreign Affairs Wang Yi said during his talks with Vietnamese Minister of Foreign Affairs Bui Thanh Son in Zhejiang Province on Thursday. Son is on an official visit to China that lasts from Thursday to Saturday.

-- Vietnam's Ministry of Health received 500,000 AstraZeneca COVID-19 vaccine doses donated by the Argentine government on Thursday. The vaccine batch is worth over $2 million.

-- Ho Chi Minh City police officers announced on Thursday that they had busted an online gambling ring whose transactions were estimated at VND87.6 trillion ($3.8 billion).

-- Vietnam has prepared enough COVID-19 vaccines to give its eligible population a booster starting later this month, Tran Van Thuan, Deputy Minister of Health, said at a press meeting in Hanoi on Thursday.

-- Low-cost carrier Vietjet announced its direct flight route from Vietnam to Moscow at a ceremony attended by State President Nguyen Xuan Phuc in Russia on Thursday.

-- Vietnam's agriproduce exports are projected to reach $47 billion in value, exceeding the target by $5 billion, at the end of this year, the Ministry of Agriculture and Rural Development said on Thursday.

-- The Hanoi People's Committee on Thursday agreed to a proposal by the local education department to let tenth, eleventh, and twelfth graders return to school on December 6, given larger vaccine coverage and Vietnam's policy of living safely with COVID-19.

-- A protein in a person's blood, 'platelet factor 4,' can bind to a key element of the AstraZeneca vaccine, potentially triggering a reaction, with antibodies attacking the protein, which in turn may lead to blood clots, The Washington Post quoted a new study published on Thursday in the Science Advances journal as indicating. Researchers from Cardiff University from the UK, Arizona State University from the U.S., and AstraZeneca joined the study.