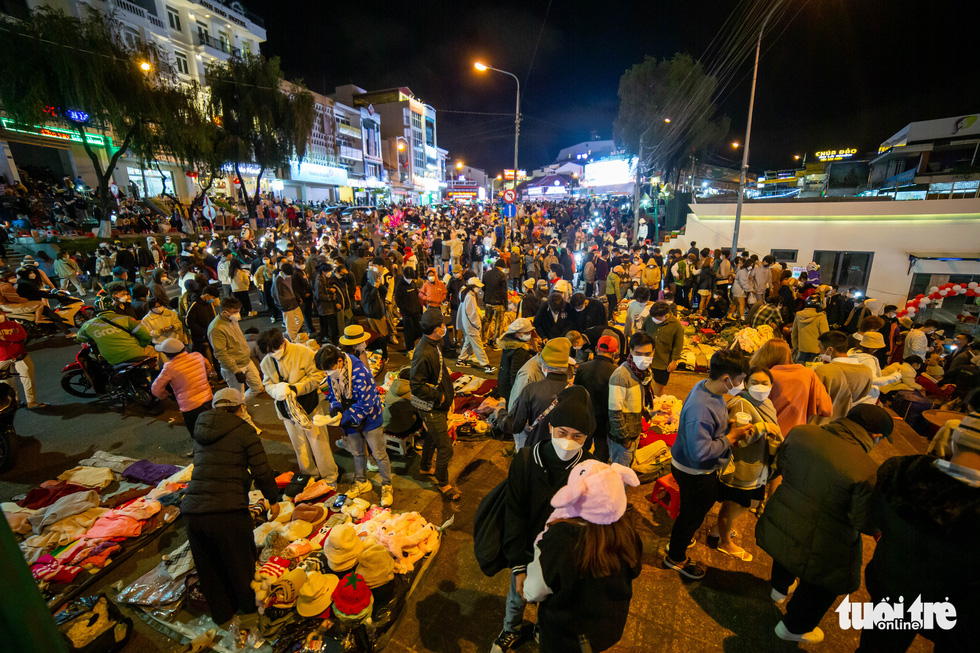 Da Lat filled with sea of travelers during Tet holiday

Da Lat, a highland tourist destination in Vietnam, had planned to receive around 100,000 visitors during the nine-day Lunar New Year (Tet) holiday, but the figure was exceeded after the first two days.

By the evening of the fifth Tet day, many visitors who could not stand the crowding had left Da Lat but the jamming remained in the town – the capital city of the Central Highlands province of Lam Dong.

After the first two Tet days, Da Lat welcomed more than 100,000 visitors, exceeding the city’s original expectation for the whole holiday, from January 29 to February 6, according to local traffic police.

Unlike in the period from 2019 backward, when the COVID-19 pandemic had yet to hit Vietnam, the congestion in Da Lat during this Tet has even spread to its suburban areas.

“It took me so long to go from the city center to Tuyen Lam Lake, which has never taken place before,” Dinh Van Bien, a photographer in Da Lat, told Tuoi Tre (Youth) newspaper.

Bien and many others had eventually to leave Da Lat as they could not stand the throngs even though going out of the town was not easier than when they tried to enter it, as traffic jams were almost ubiquitous.

Tran Vien Son, a traveler from Ho Chi Minh City, had booked hotel rooms for his family until Sunday but they decided to depart Da Lat on Saturday since all services were overused.

“Staying here longer wouldn’t be advisable as every food and beverage joint and other service providers have been run to their capacity,” Son said.

“In addition, we cannot travel easily when congestion happens everywhere.”

It took his family more than 12 hours to reach Da Lat and they had to jostle for meals in restaurants crammed with diners, the visitor complained.

“It is not easy to find a place, even an ordinary one, for a simple meal because all eateries have been utterly packed,” Son said.

Le Thuy, the owner of Nha Cua Tre (Home of Bamboo), a homestay facility, said she had received 120 phone calls for room booking every day.

“It is very embarrassing for us, accommodation providers, to say to our guests that all rooms had been booked since before Tet,” Thuy admitted.

Some domestic tourists complained that many service providers have increased prices in the form of a service charge equal to an extra 30 percent.

Since numerous travelers who could not find a hotel room or other accommodations had to spend their night in tents around Xuan Huong Lake, the Da Lat administration opened a hotline to assist such domestic tourists in finding shelters.

Local authorities said they had not anticipated such a massive number of visitors to the city during this Tet.

By Saturday evening, the number of travelers coming to Da Lat without having previously booked hotel rooms accounted for 20 percent, or around 20,000 people, of the total count of visitors to the city, according to statistics.