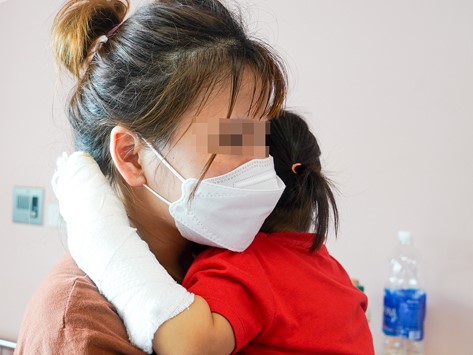 A two-year-old girl residing in Hanoi was electrocuted and had a cardiac arrest, losing her consciousness and having her entire left palm severely burned, after unplugging a charging mobile phone to play with it.

The orthopedic department of Vietnam National Children’s Hospital is treating B.A., 29 months old, who was admitted to the hospital in a cyanotic state, with her left palm being extremely burned.

Th., A.’s mother, said that the baby had unplugged a charging mobile phone and got electrocuted.

The baby was then knocked unconscious, with her body turning pale while her left palm became black.

A neighbor gave A. first aid before her family members took her to the hospital.

“I was very shocked and scared,” Th. said.

“Before that, I also knew about electric shock accidents caused by charging mobile phones through the media, but did not think it would happen to my child.”

Dr. Phung Cong Sang, deputy head of the orthopedic department of Vietnam National Children’s Hospital, said that A. has been treated for cardiovascular risk and acute renal failure.

After helping the baby into a stable state, doctors performed a surgical excision of her necrotic skin, treating her muscle and finger bones, ensuring both of her hand’s function and esthetics, according to Dr. Sang.

“After the surgery, the baby is now in a stable condition, but her recovery still needs a long time,” the doctor said.