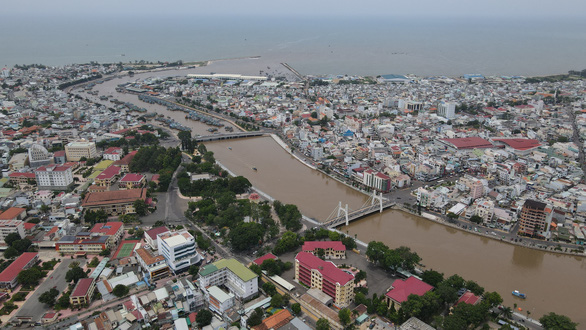 Authorities in the south-central Vietnamese province of Binh Thuan, an area currently suffering the consequences of severe drought, water shortages, and desertification, believe increasing green coverage will solve the problem, but the plan can only succeed with cooperation from local businesses.

While the province’s beautiful beaches and year-round dry climate are a major draw for visitors, the lack of green coverage is becoming a major issue for both the environment and the quality of life of local residents.

Green coverage in Binh Thuan is currently about 43.02 percent, with green areas mostly limited to the many planted and natural forests in Tanh Linh, Tuy Phong, Ham Thuan Bac, and Ham Thuan Nam Districts, according to Ho Thien Dang, head of the provincial forest protection department.

Conversely, there is very little green to be seen in coastal and large urban areas such as Phan Thiet City, Phu Quy Island, and La Gi Town.

In recent years, the increase in green coverage has been minimal, primarily due to urbanization and deforestation, Dang said.

“Local authorities are planting trees in other places [to make up for deforestation],” the official said.

"The primary goal is to maintain the percentage of green coverage [in the province]."

The exploitation of forest land for urbanization has led to to erosion, desertification, ecological imbalance, and groundwater and environmental degradation, according to Le Van Chon, deputy chairman of the People’s Committee of Phan Thiet City.

The state budget covered about 30 percent of the initiative while the rest was backed by private businesses.

Provincial authorities now have their sights set on continuing to increase green coverage in order to ensure comprehensive and sustainable development.

According to Dang, included in this goal is an initiative to plant 10 million trees in Binh Thuan between 2021 and 2025, with priority given to coastal, urban, and residential areas.

To reach this goal, authorities are calling on support from local businesses.

One enterprise heeding this call is NovaGroup, a Vietnamese corporation focused on economic development and investment that recently helped plant trees along major streets in Phan Thiet City and is planning to replicate such work in other areas of the province.

They were grown in a laboratory managed by Nova Evergreen, a member of the NovaGroup ecosystem.

Deputy chairman Chon hailed NovaGroup for its support and called on similar actions from other enterprises.

Plans are currently in motion for NovaGroup and Binh Thuan authorities to coordinate the launch of a tree-planting campaign along Pham Van Dong, Ba Trieu, and Au Co Streets in Phan Thiet City on the morning of June 5, in response to the ‘Plant 1 billion trees in 2021-2025’ initiative of the national government.

The program is also part of the ‘Green Up Vietnam’ – a project initiated by NovaGroup in which the corporation, its partners, customers, and employees will plant trees in provinces and cities across the country.

In early 2021, NovaGroup coordinated with the People’s Committee of Lam Dong Province to launch another program aimed at planting 50 million trees during the 2021-25 period in order to increase green coverage in the Central Highlands province by two percent, pushing it to a total of 55 percent.