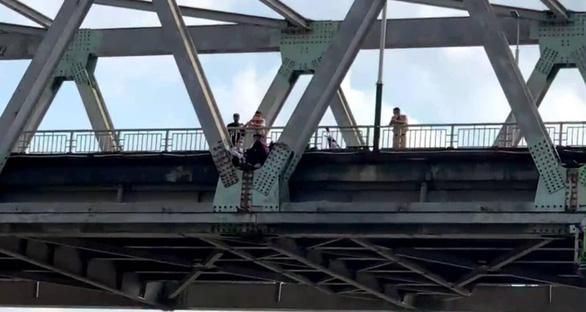 A pregnant woman intended to end her life by jumping into water at the Ho Bridge in Bac Ninh Province, northern Vietnam due to a conflict with her boyfriend, but she was saved by police last weekend.

The woman was identified as Vang Thi D., aged 28, who lives in Ha Giang Province.

A team of waterway police officers from the Traffic Police Department under the Ministry of Public Security said Monday that they had successfully rescued a woman who intended to commit suicide at the Ho Bridge spanning the Duong River in Tien Du District in the province on Sunday.

At around 3:20 pm on that day, the team dispatched four waterway guards, ships, and vehicles to the scene for rescue efforts after being notified of the case.

The rescuers managed to talk the woman into giving up her suicidal thoughts.

D. said that she got pregnant with her boyfriend, who resides in Gia Binh District, Bac Ninh.

However, a conflict with him made her intend to commit suicide.

After taking her to a safe place, the officers persuaded D. to call her family to take her home.