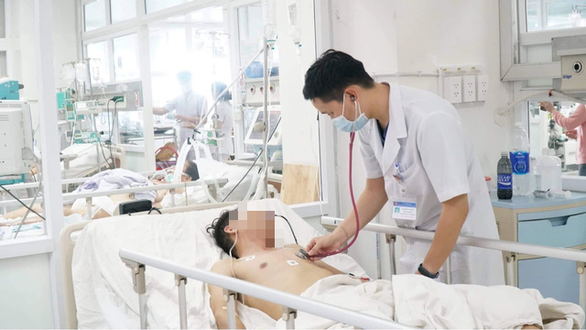 All these patients were in severe conditions upon hospitalization, with one of them falling into a coma and having convulsions, the Central Highlands General Hospital said on Monday.

They were diagnosed with anaphylaxis likely due to poisoning from the cicada larvae they had eaten, doctors said.

They were among a group of five men joining a drinking party at a restaurant in the province’s Buon Ma Thuot City on Saturday last week.

During the party, they had a dish of processed cicada larvae brought in by one of them, who said the insects had been found from the soil in his home garden.

After the party, the whole group suffered from abdominal pain, vomiting, diarrhea and dizziness, but three of them, aged 37, 46 and 48, fell into a serious condition and were taken to the hospital.

The remaining two have recovered after treatment at home.

After being treated, all the three hospitalized patients are out of danger but they need further treatment, doctors said.

Cicada larva poisoning has many levels, from mild instances that cause urticaria and a rash to severe cases with more dangerous conditions including difficulty breathing and low blood pressure, according to doctors.

People with symptoms such as fatigue, chest pain, and shortness of breath after eating the insect should be hospitalized soon for timely examination and treatment, they advised.