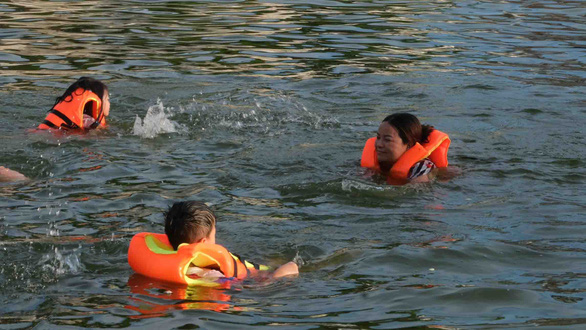 In the heat of the summer, hundreds of people gather at a pond on the outskirts of Hanoi for a cool bath every day. At the natural 'pool,' children are prepared with life jackets, jumping from the ledge to the water and playing around in the cool water under the watchful eyes of parents.

Teaching each other how to swim

At around 4:00 pm at the 'pool' in Minh Hoa Hamlet, Minh Khai Commune, Hanoi, children meet up to go swimming.

The locals shared that the 'pool' is just a reformed pond, but the children use it for swimming activities in the summer.

Turning six this year, Do Van Dat knows the basics of swimming thanks to his brother Do Van Minh, 13.

Both always wear life jackets to ensure their safety while swimming.

Dat said he loves summer because he gets to spend time with his brother doing swimming activities.

Do Dang Tuan, 52, observes the children playing in the pond.

After the pond turned into the 'pool,' children start coming out to swim, he said, adding that parents take turns watching and teaching safety skills to the younglings.

Tuan cannot bring his daughter to a normal swimming pool, so for the past three years, he has been teaching his child how to swim in this pond.

He is teaching his child the basic water safety measures because his house is near ponds and rivers.

At the outset, Tuan’s daughter was scared of the deep waters but after getting taught by her father and knowing the basics, she began to ask for permission to go swimming daily.

The girl, named Do Thi Thuy Dung, a seventh grader, stated she has acquired some swimming skills and is currently confident to help other new swimmers.

She shared that before going down the water, children gather around and do exercise to warm up the muscles to avoid cramps.

She added that she would remind anyone failing to have a life jacket on for safety purposes.

"Swimming in a pond usually causes problems like littering and pollution so the water can get polluted," Dung said.

"The children just want a large and clean pool for playing and swimming."

In Duong Lieu Commune, Hoai Duc District, locals proudly talk about the 'natural pool' in the Thien village pond, saying it was “even shown on TV."

On hot summer days, the pond is a common place for children and people to cool off.

Looking at the children playing in the water, Nguyen Thi Bich Lien, a local resident, constantly reminds them to swim toward her.

Last year, Lien usually took her child out to the Thien Village pond.

After seeing some people bathe in the pond, the child insisted on getting down the pool but he was too young then.

Now that he is older and able to wear a life jacket, Lien took him to swimming lessons there.

In the countryside, there are ponds and rivers which make parents concerned because drowning cases can happen anytime.

When engaging in swimming activities in the Thien Village pond, children are ensured safety by their parents preparing them with life jackets and swimming lessons while at the same time keeping a close eye on them.

Nguyen Thi Long, 35, signed her child up for a swimming class before letting him swim in the village pond.

When the child is well-prepared and is no longer scared of the water, the mother will let the child bathe in the village pond.

Long shared that each afternoon, she takes the boy out for a swim and always makes him wear a life jacket and reminds him to follow the rules carefully.

After each swimming session, the children eat and sleep better while staying away from phones or TVs, which is a bliss for a mother like Long.

In 2016, the people of Duong Lieu Commune in Hoai Duc District, Hanoi reformed and cleaned up the garbage discarded in the Thien Village pond.

The pond area is roughly 7,000 square meters and has become a free pool for everybody.

The swimming movement in Duong Lieu has since grown stronger and thanks to that, cases of drowning have significantly reduced.