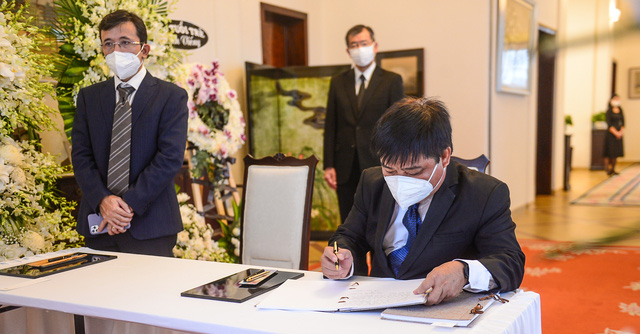 Tuoi Tre Editor-in-Chief Le The Chu and Deputy Editor-in-Chief Tran Xuan Toan extended their condolences to the family of former PM Abe and to the government and people of Japan.

“I, like many other Vietnamese people, would like to express my respect and gratitude for Mr. Shinzo Abe’s contributions to the Vietnam-Japan relationship,” Chu stated.

Abe had a special affection for the press and Tuoi Tre was fortunate to have interviewed the former prime minister before his visit to Vietnam in 2013 and 2017.

In 2013, Vietnam was the first country that Abe visited after assuming his prime minister post.

Answering Tuoi Tre, the former premier expressed his hope to promote bilateral relations, considering his visit an opportunity to create a leap forward in the cooperative relationship between the two countries.

Prior to his Vietnam visit in 2017, Abe told Tuoi Tre that he was determined to further develop the relationship between Japan and Vietnam.

His legacy has a profound impact on the relationship between Vietnam and Japan, Chu stated.

“We would like to express our gratitude and bid farewell to a good friend of Vietnam,” the editor-in-chief continued.

“We hope that Mr. Abe’s great legacy will continue to serve as a bridge between the two countries.”

He was shot in an apparent assassination attempt earlier the same day during a stump speech for Sunday's Upper House election.

The killing of the former leader shocked the nation and reverberated around the globe.