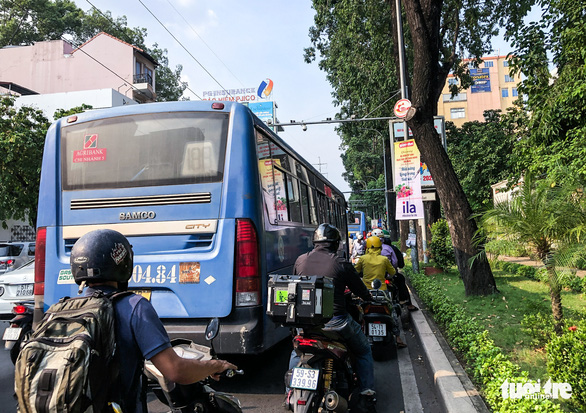 In fact, such violations are not new but they have become rampant again recently when Vietnam reopened the economy in the wake of the COVID-19 pandemic since October last year after nearly two years of closure, during which city bus operations, among other activities, were suspended.

As there have been no separate lanes or routes for them, city buses have been given priority to travel in all lanes, leading to many bus drivers feeling free to change course suddenly and to carelessly pick up and drop off passengers, among other violations.

All that constitutes a danger to commuters, especially during rush hour.

In late June this year, two buses recklessly jumped the lights to the surprise of a lot of people in traffic, including Tuoi Tre reporters, in an area near the so-called ‘University Village’ in Thu Duc, a province-level city in Ho Chi Minh City.

Another violation took place on July 14 on the Dien Bien Phu Street section near the Saigon Bridge in Binh Thanh District, where two buses that were traveling in opposite directions blatantly halted next to the media barrier for a chat between the drivers, despite a lot of vehicles behind them.

Many other violations such as drivers changing lanes suddenly or inconsiderately flashing signal lights continuously to prevent being overtaken by other vehicles have been recorded on numerous routes including Pham Van Dong, Dinh Bo Linh, and Truong Chinh.

Your correspondents saw many motorbike riders express their upset and anxiety when they had to make urgent stops to avoid collisions with such buses.

There have been buses that kept running close to sidewalks to pick up or drop off passengers, occupying the lane and thus causing congestion.

Ngoc Nhung, a resident of Thu Duc, told Tuoi Tre that she felt extremely frustrated because city buses always overwhelmed other vehicles, including her motorbike, by occupying the traffic lanes randomly, particularly during rush hour.

Many motorbike riders then ran on the sidewalk to try to overtake such buses, Nhung said.

“I know that buses have no separate lanes for them, but such reality is unacceptable as it seriously hinders the traffic flow of other vehicles,” Nhung said.

Speeding is another traffic law breach by many bus drivers, triggering great anxieties among commuters, including those on Hanoi Highway, where many tend to choose to travel close to roadsides whenever spotting a bus rushing from afar.

Meanwhile, some bus drivers told Tuoi Tre that they have to work under great time pressure, which makes them race against the clock to be on time.

“It is very difficult to drive safely when we have to race against time,” a driver claimed.

“However, that is not the reason for me to ignore everything while driving.

“We drivers often remind one another not to commit dangerous acts in traffic.”

As the city’s traffic infrastructure intended for buses has remained insufficient, buses and other vehicles have to use the same lanes, which has compromised traffic safety, the center admitted.

The city will therefore implement some projects to upgrade the bus service infrastructure system in the coming time, including adding a rapid bus system on Vo Van Kiet Boulevard, which runs through different districts.

This quality bus route is expected to be put into operation at the end of 2023 or in early 2024, according to Traffic Construction Investment Project Management Board.