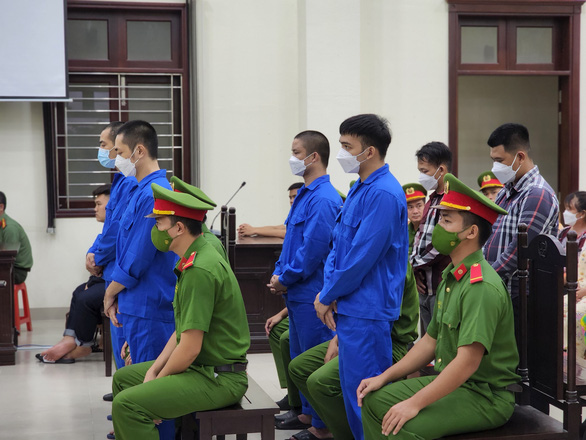 Two people were sentenced to death earlier this week while many others received prison terms from two to 20 years for murder and storing and using military weapons in Vietnam.

The People's Court in Long An Province ordered a death sentence for To Nhut Khanh, 29, and Tran Trung Thanh, 29, as well as a 20-year prison term for Le Thanh Phuc, 29, on Wednesday.

Vo Tuan Vu, 23, will be jailed for two years and three months for storing military weapons and failing to report crimes.

Pham Huynh Phuc Thien, 19, will also serve two years in prison, while To Phuoc Loc, 20, will spend a year and six months behind bars for failing to report crimes.

Aside from Thanh, who resides in Ho Chi Minh City, all of the defendants live in Tien Giang Province in the Mekong Delta region of Vietnam.

According to the verdict, due to a conflict between himself and Dao Quoc Lieu’s group and Dao Quoc Thinh, who is Lieu’s biological child, Khanh bought four homemade guns, two homemade revolvers, 33 bullets and grenades, and a variety of tools he planned to use for self-defense.

On April 30, Thien drove Khanh on a motorbike with a plan for him to shoot Thinh.

Thinh suffered an injury rate of 25 percent from the shooting.

After hearing that someone in Khanh’s group was slashed by Lieu, the gang and Khanh met to discuss the issue.

Thanh was once helped by Khanh’s family so he agreed to help Khanh take revenge.

Khanh gave Thanh a gun and drove him to shoot Lieu.

Phuc and Thanh then proceeded to chase down and murder Lieu in Long An on July 25.

After they committed the crime, Thanh and Phuc traveled to Ho Chi Minh City to hide.

Thien, Loc, and Vu all knew of the murder but none denounced the crime. Furthermore, Vu participated in hiding Khanh’s weapons.

In court, all of the defendants expressed remorse and asked for commutation.