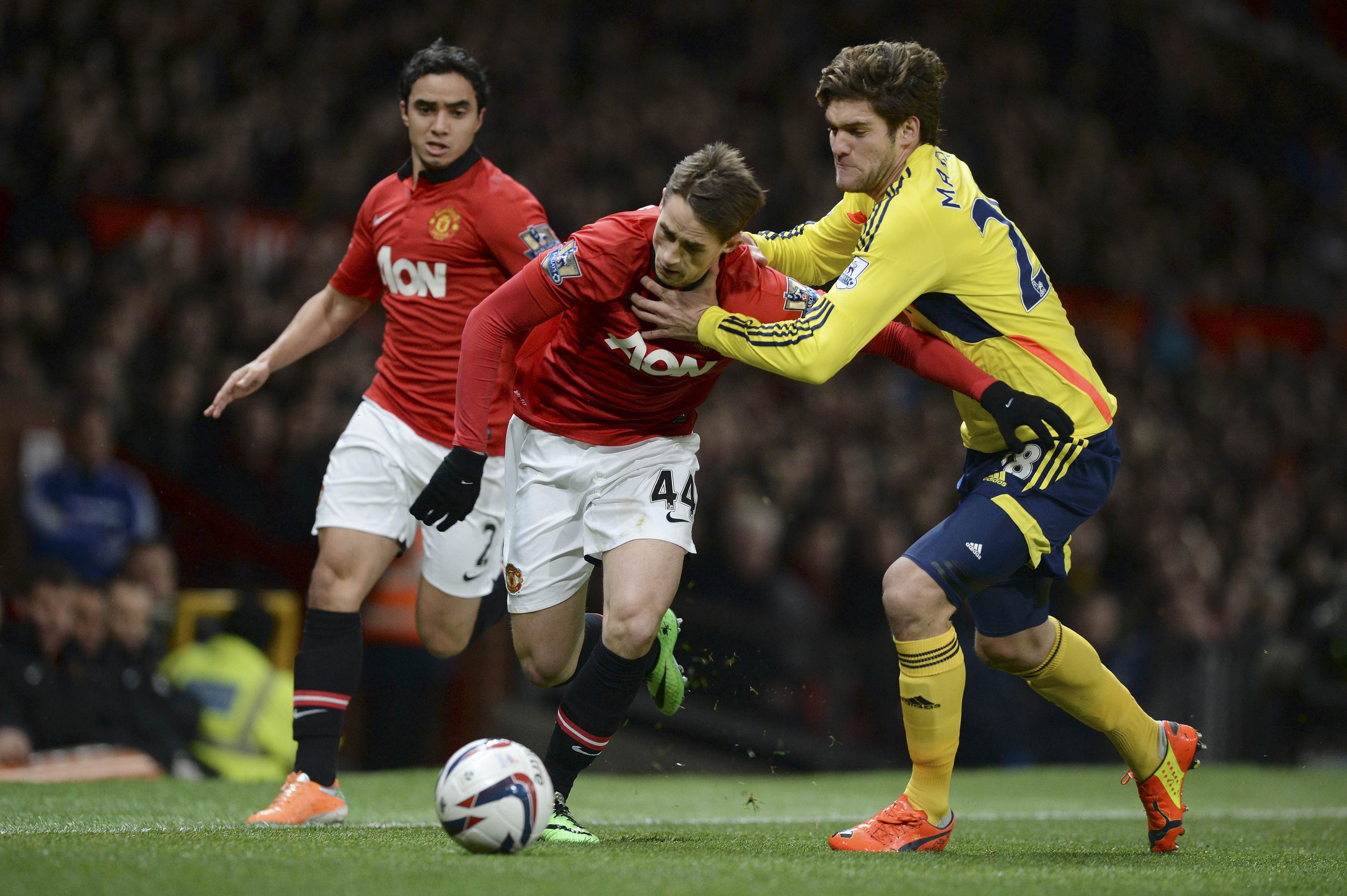 Manchester United's troubled season took another turn for the worse when they lost 2-1 to Sunderland in an error-strewn penalty shootout in their League Cup semi-final on Wednesday.

United looked to be heading for the final against Manchester City when they led 1-0 two minutes from the end of extra time before a dreadful error by goalkeeper David de Geagifted Sunderland's Phil Bardsley an equaliser.

Javier Hernandez's dramatic intervention moments later gave United a 2-1 win on the night and a 3-3 draw on aggregate which sent the tie to penalties.

But to Old Trafford's disbelief, England striker Danny Welbeck, Adnan Januzaj, Phil Jonesand Rafael failed to convert their spot-kicks and it was Sunderland - who missed three penalties of their own - who scraped through to the March 2 showpiece at Wembley.

The outcome left David Moyes facing more scrutiny in his first season as United manager and under pressure to add to his lacklustre squad in the January transfer window.

Media reports around kickoff time suggesting United were on the verge of buying Juan Mata from Chelsea for 37 million pounds ($61.4 million) were timely all round.

Asked if criticism of him and his players was fair, Moyes told Sky Sports: "It's fair if you don't win at this football club. I understand that."

The Scot, whose side are seventh in the Premier League and in danger of failing to even qualify for next season's Champions League, added: "David de Gea's been very good this season. It happens (making mistakes) but that was a costly one.

"The shootout was really poor. I expect better. We didn't play well tonight ... overall we didn't really deserve to go through after the way we played.

"That's football, we'll get on with it, pick ourselves up and go again."

United had been on course to make the final on away goals after Jonny Evans scored with a close-range header shortly before halftime to put them one up.

But they laboured throughout and were clinging on for victory when De Gea failed to stop a routine 20-yard shot from Bardsley - a former United player - in the 119th minute and watched as the ball squirmed off his palm and into the corner of the net.

United stunned the visitors by hitting back in final minute of extra time, Hernandez sweeping home off the underside of the bar from Januzaj's low cross to force penalties.

Yet Hernandez could have put the outcome beyond doubt but for a glaring miss in extra time.

Januzaj did well to wrestle free on the right and feed the striker on the break, but Hernandez, running unopposed on keeper Vito Mannone, decided to take on an early shot and wafted a left-foot effort well wide.

Uruguayan Poyet has invigorated Sunderland since taking over from Paolo Di Canio in October last year but they still lie second-bottom of the Premier League table.

The Black Cats are now looking forward to their first Wembley appearance since 1992 - when they lost the FA Cup final to Liverpool - and another chance to add to their famous win in the 1973 FA Cup final.

"To have a day of football like this is great for everybody, great for football too," Poyet said. "Let's see if we can go one better.

"The things that happened today were incredible, the players have been outstanding, they have been trying to learn the way I want them to play so credit to them."