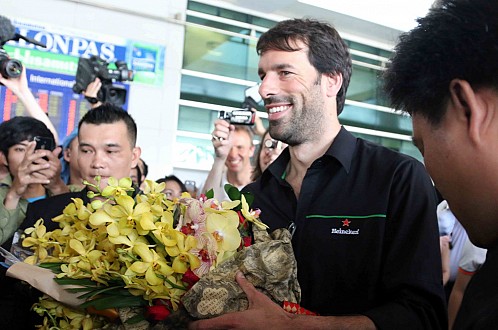 The former Manchester United and Real Madrid striker is in Vietnam as part of the Heineken UEFA Champions League Trophy Tour 2014, which provides diehard football fans with an opportunity to touch and feel the trophy.

In 2011 Van Nistelrooy became a brand ambassador for Heineken, which is a major partner of the UEFA Champions League and is taking the trophy around the world in its eighth annual tour.

Besides this event, the 38-year-old striker, who is the fourth-highest goal-scorer in Champions League history with 56 goals, as said on Wikipedia, will also have a meeting with Vietnamese fans at Thao Dien Village in the city’s District 2 on Friday.

Ruud van Nistelrooy retired from football in May 2012.

Below are the questions from Tuoi Tre readers and the former footballer’s answers.

* Which club do you think will win the Champions League this year? (linhtoan@gmail...)

Ruud van Nistelrooy: I was hoping it will be one of my former teams. I know Real Madrid is looking to win the tenth trophy in its history. And also Man Utd, I want them to do well.

But I think this year Bayern Munich is in favor and they will win again as did last year and become the first team to win two years in a row.

* What is your prediction for the second-leg game between Man Utd and Bayern Munich at the 2013-14 Champions League after Man Utd was held 1-1 at Old Trafford?Ruud van Nistelrooy: I think the away goal that Bayern Munich scored is a big advantage and Man United needs to be the winner to go through. That will be very difficult because this season they are not in the best form. As I said before, they are in the transitional time. But in the end they will get better. They need some time. And the score will probably be 2-1 for Bayern Munich.

* Real Madrid is performing well with stars like Ronaldo and Bale at the 2013-14 Champions League but why do you predict Bayern Munich will be the winning team?

Ruud van Nistelrooy: Real Madrid is in good form and I always hope they can advance into the finale and defeat Bayern. I also hope my prediction is wrong.

* Do you think David Moyes is the right choice for Manchester United? (fanmu290@yahoo....)

Ruud van Nistelrooy: I think so. Yes, I think he needs more time to rebuild the team and to bring Man Utd back to the top, where they belong. United will always be the greatest club in Britain and all players want to play for them. And in the end, I think David Moyes is capable of rebuilding the team and bring them back to the top in the future.

* Do you think Sir Alex Ferguson may return to Manchester United as a coach some day? (lamhoaithinh631@gmail...)

Ruud van Nistelrooy: No, I don’t believe so. He’s retired for some reasons and he’ll stick to that.

* Which team will be the World Cup 2014 champions? (ducthanhlamvan@gmail...)

* Let’s talk about Robben.Ruud van Nistelrooy: Robben is one of the best players in our national team. The Netherlands always needs him in his best form. If our team has success at this World Cup, it is because of Robben.

* When did you start to play football? (hoaivinh@gmail.....)

Ruud van Nistelrooy: I played as early as I could walk. But I started with a local club at my village when I was six. During my childhood I never went anywhere without my ball. The proudest moment of my whole life was when we won the cup with the U-9 team of my local village. We had never won any trophies before.

* When you were a child, which footballers did you admire most? (quangvinh72@yahoo...)

Ruud van Nistelrooy: In the World Cup 1986, when I was ten, I saw Diego Maradona. He played an incredible football and has since become my hero.

* Even with the sad stories in his life, will he remain your hero forever?

* Had you not been a footballer, what would you have become? (hoangnha123@gmail...)

Ruud van Nistelrooy: I don’t know. I never thought about anything else. My parents wanted me to go to an economics school to start my job but I asked them, “What for?” I only love football.

* How is your life after retirement from football?Ruud van Nistelrooy: First of all the reason I retired is because physically I could not play at a high level and I have to accept that. Without football, I enjoy my free time, my life with my children, and plan my own life. I started to enjoy that life one year after retirement. And I decided to study again to become a coach. I was hoping I will become an assistant coach for Holland and will develop myself as a coach.

* Do you remember the number of goals you scored in Champions League competitions?Ruud van Nistelrooy: I don’t know…Sixty...Sixty-three or something.

Ruud van Nistelrooy is seen picking a ball during a lucky draw to select three fans for three free trips to Europe, including one ticket to watch the final match of the 2013-14 Champions League on May 24. Photo: Truong Son