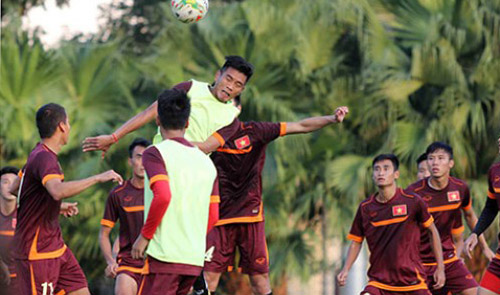 Hosts Vietnam are aiming for a big win over Laos in their second group stage game at the 2014 Southeast Asian Football Championship, or AFF Suzuki Cup, on Tuesday to get an advantage in the race to the semifinals.

The Group A clash will take place at 7:00 pm (Vietnam time) at My Dinh Stadium in Hanoi, following the Vietnamese side’s 2-2 draw against Indonesia and Laos’ loss to the Philippines in their openers on Saturday.

After facing Laos, Vietnam will play their last group stage game with the Philippines on November 28.

Laos have not defeated Vietnam since 1991. During the period, the teams have played nine times, with the Vietnamese winning eight times and drawing once.

For the Vietnamese side, left defender Xuan Thanh will miss the match thanks to injuries he sustained in the Indonesia game.

Coach Miura said, “We have just one point now so we must attack Laos to find a win today.

“We will try to score as many goals as possible to get an advantage in the race to the semifinals.

“It is not an easy job because Laos may stage a defensive formation.”

David Booth, Laos’ coach, admitted his players made mistakes in the 1-4 loss to the Filipinos.

“The Vietnamese are a strong team and we will try our best to display good football,” said Booth.

The Philippines now top Group A with three points, followed by Vietnam and Indonesia, who have one point each.

The AFF Suzuki Cup, which has two groups, is being co-hosted by Vietnam and Singapore from November 22 to December 20.