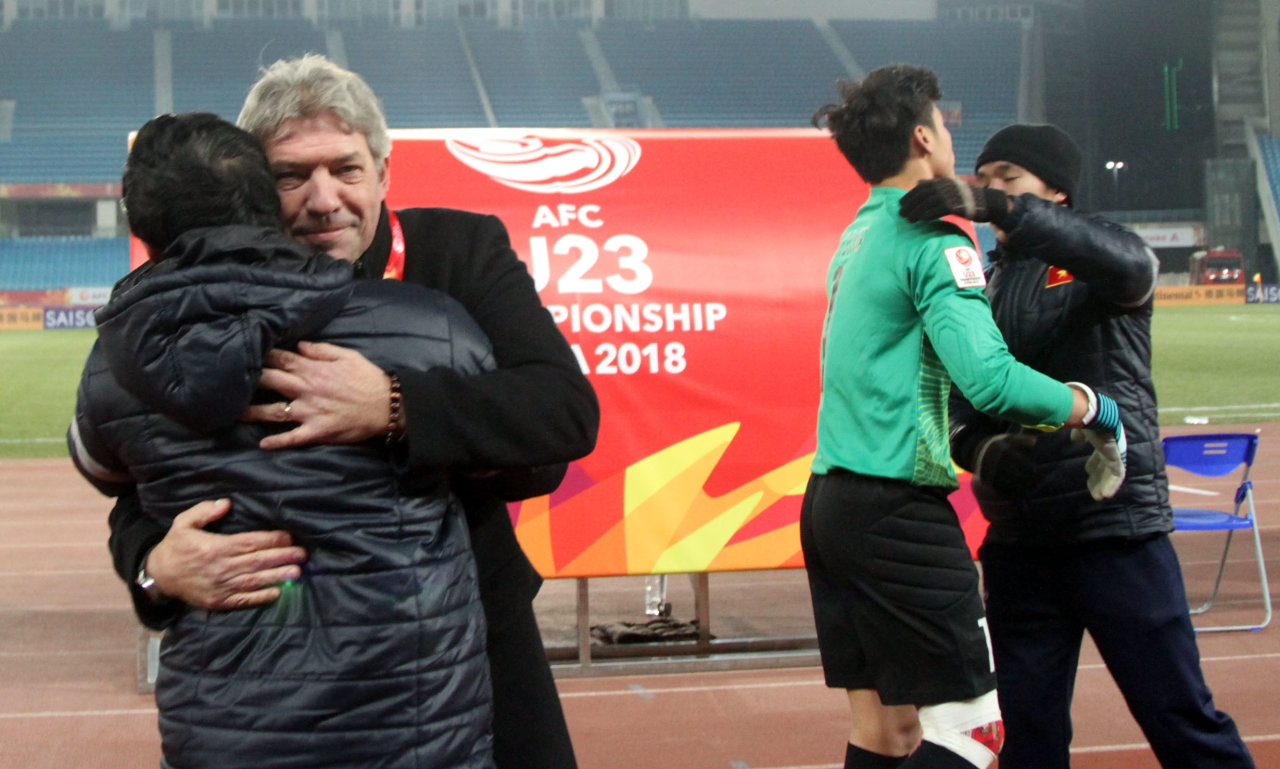 Vietnam’s under-23 football team could not have displayed such an outstanding performance at the 2018 AFC U23 Championship without the contribution of the unsung heroes, one of whom was Jurgen Gede, the team’s advisor.

Gede, who is from Germany and technical director of the Vietnam Football Federation, was in charge of observing the players and providing consulting for head coach Park Hang-seo in his tactics.

He joined the football federation in 2016 and has since significantly contributed to the development of the country’s under-16 and under-20 soccer teams.

Gede, who is now 62, was chosen by Park, who became the head coach of Vietnam’s national football team and U23 team in 2017, as his advisor and an essential member of the coaching staff during the 2018 AFC U23 Championship in China.

His main tasks were to closely observe Vietnamese players during training sessions as well as their opponents during the entire tournament.

He noted down the strengths and weaknesses of each and every team before delivering the best advice and tactics to coach Park.

Gede’s role was highlighted during the match between Vietnam and Iraq in the quarterfinals as midfielder Phan Van Duc, who was chosen to join the team just a few days before the championship, displayed an impressive performance.

Gede also gave guidance in replacing defender Doan Van Hau, who was not able to compete after the quarterfinal game due to injuries, with Pham Xuan Manh.

According to Duong Vu Lam, head of the Vietnamese delegation to the 2018 AFC U23 Championship, Gede could not have been able to reach his full potential if he had not had such a close relationship with coach Park.

The two always talked during meals and free time and showed respect for each other, Lam elaborated.

Gede never “crossed the line,” Lam continued, adding that he only gave advice based on his expertise, whilst Park was the one making all the decisions.

Meanwhile, Park highly appreciated the contribution of Gede, as his opinion was significant for the preparation before every highly-contested match.

Other fundamental members of the coach staff were Bae Ji Won, the team’s fitness expert, and Lee Young Jin, who was in charge of pointing out advantages and disadvantages of each player during the half-time break.

The AFC U23 Championship, held from January 9 to 27, is a biennial competition featuring 16 of Asia’s top teams in the age group.

Vietnam started the journey in China with a 1-2 loss to South Korea before stunning Australia 1-0 and drawing 0-0 against Syria.

The team beat Iraq in the quarterfinals following a 5-3 penalty shootout, and gained victory over Qatar in the semifinals in a 4-3 shootout.

They finished second after losing 1-2 to Uzbekistan in the final game.