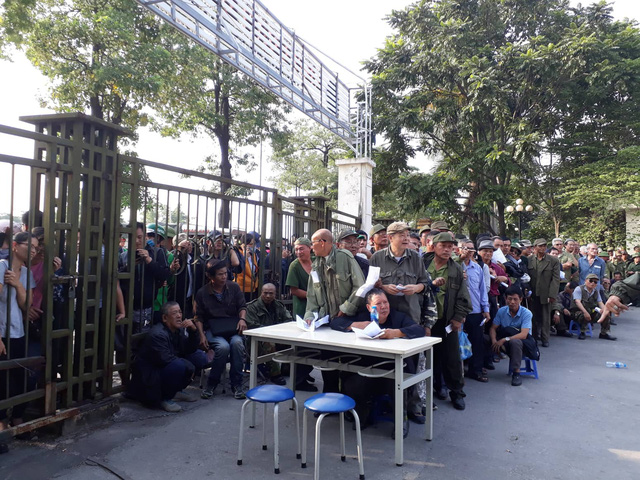 Efforts to avoid crowds of fans jostling to grab a ticket to watch the Vietnam-Philippines semifinal at the 2018 AFF Championship of the Vietnam Football Federation (VFF) went awry as online-booking sites were struck with technical issues even before tickets were officially made available for purchase on Wednesday.

The VFF hoped that offering 20,000 tickets for the December 6 clash through four web outlets – vebongdaonline.vn, vebongonline.com.vn, ticketonline.vff.org.vn, and vebongda.vff.org.vn – would help ward off a repeat of the rush at brick and mortar booths which occurred for group stage tickets earlier this month.

Tickets for next week’s match were meant to go on sale from 10:00 am Wednesday to 12:00 pm the following day, or until they are sold out.

However, doubts cast by fans well in advance of tickets going on sale that VFF’s would not be able to ensure the technical infrastructure for the online booking turned out to be correct.

Though fans eagerly attempted to buy tickets from those websites on Wednesday morning, few were able to make a purchase.

By 10:30 am that day all those who attempted to purchase tickets were greeted with a message saying, “All tickets of this price tier have been sold out or the remaining tickets are in the process of being paid by customers. Please choose another price tier or come back later!”

The message popped up for each of the four available price tiers.

Nguyen Ngoc Minh, a resident in Hanoi’s Cau Giay District, wanted to buy two tickets to watch the game with his wife, but his continuous efforts between 10:00 am and 3:00 pm were in vain.

Fed up with the recurring message on the websites, Minh even drove to the VFF headquarters in Hanoi, but “I still had to go home empty-handed,” he told Tuoi Tre (Youth) newspaper.

In a statement made Wednesday afternoon, VFF asserted that they had not yet sold all 20,000 tickets, admitting that their websites were overloaded by the large volume of traffic that morning.

The federation said 9,000 tickets had been booked by 4:00 pm on Wednesday, with 5,000 successful bookings made that morning. VFF said online sales will continue until all tickets are sold.

The booking websites were overwhelmed by the 40,000 to 50,000 unique visitors who logged on when sales officially started and trouble only worsened when the number of visitors hit 100,000, far beyond VFF’s server capacity, according to the statement.

“This is why only a certain number of customers could perform transactions and others had to wait,” it said.

Some ticket buyers were also greeted with an error message saying the tickets they wanted to buy were “pending payment from another buyer.”

Many Internet users have complained that online booking which requires a customer to wait until another customer finishes their payment is no different from queuing at a physical ticket booth.

Despite this inadequacy, VFF secretary Le Hoai Anh said that the Vietnamese football governing body has no plans to return to the offline sales, and that the organization plans to soldier on with its online booking system for future matches.

Meanwhile, hundreds of football supporters, many of them war invalids, broke into VFF’s headquarters on Le Quang Dao Street in Nam Tu Liem District on Wednesday morning, demanding to purchase tickets for the Vietnam – Philippines match in person.

After entering VFF grounds, they headed to an office building where VFF staff members and leaders were working.

VFF had to contact both the district and municipal police units to maintain order and safety at the headquarters.

This is not the first time angry fans have stormed the headquarters hoping to buy tickets for important matches, “but this is the first time fans have climbed up to the third floor where the VFF management’s offices are,” a VFF staff member told Tuoi Tre, adding that many of the ‘intruders’ were loud and aggressive.

“Currently, all entrances to the VFF headquarters are in lockdown so that no one can enter or exit the building."

In previous invasions, extreme fans even brought food and drinks to ‘camp out’ with until VFF allowed them to purchase tickets, according to the VFF staff.