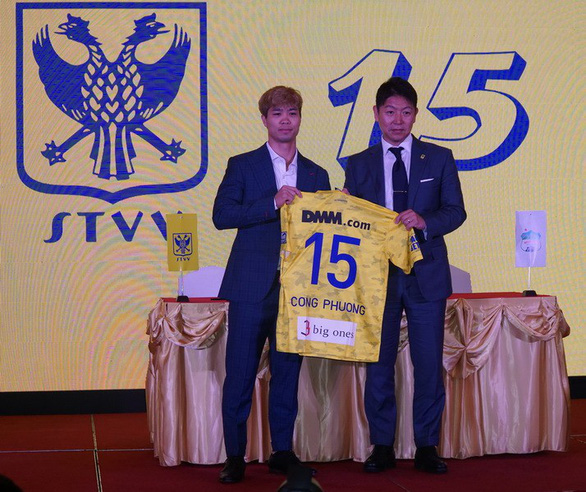 Vietnam’s top striker Nguyen Nguyen Cong Phuong will play for Sint-Truiden in Belgium’s top-flight Jupiler Pro League in the upcoming 2019-20 season on a one-year loan that was signed on Friday.

The Vietnamese striker’s club, Hoang Anh Gia Lai (HAGL), which compete in the country’s top-tier V-League 1, and the Belgian side closed the deal in Ho Chi Minh City this morning.

Many factors will determine whether the contract will be extended after 12 months, Doan Nguyen Duc, a prominent Vietnamese businessman who owns HAGL, said at the event.

Duc refused to disclose Phuong’s wage at the Belgian club, only hinting that his monthly salary is “equal to the full-year income of a Vietnamese player who plays domestically.”

Phuong’s most recent foreign club is South Korea’s Incheon United, where he reportedly made US$10,000 a month.

The 24-year-old Vietnamese is scheduled to leave for Belgium this weekend.

He will wear jersey number 15 at his new club.

Sint-Truiden ranked seventh out of 16 teams in the 2018-19 season of the Jupiler Pro League, earning 47 points after 30 matches.

The club were founded in Sint-Truiden, Limburg in February 1924. Their Stayen stadium can seat 14,600 spectators.

They are coached by Marc Brys, a former Belgian footballer.

He started to shine at the age of 18, winning the second-place of the 2013 AFF (ASEAN Football Federation) Under-19 Youth Championship.

The striker played an important role in Vietnam’s finishing second at the 2018 AFC U-23 Championship.

At senior level, Phuong was part of the champion squad at the 2018 AFF Cup, which was the Southeast Asian trophy.

His career abroad includes a year-long period at Japan’s Mito Hollyhock in 2016, and a four-month stint at South Korea’s league club Incheon United in 2019, where he started playing in February on a one-year loan.