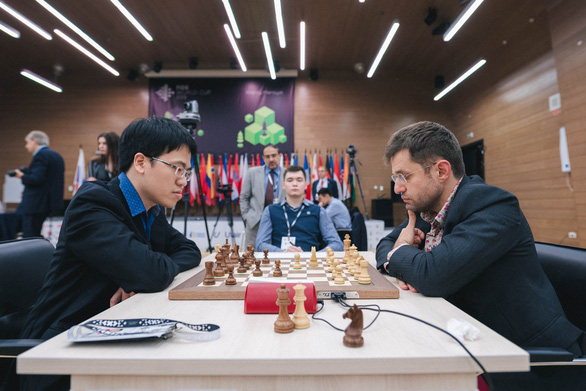 Vietnam’s No.1 chess player Le Quang Liem ended his journey at the 2019 FIDE World Cup ongoing in Russia after he was defeated by defending world champion Levon Aronian at the fourth round on Sunday night.

The biennial FIDE World Cup 2019 is a 128-player knockout chess tournament held in the Russian town of Khanty-Mansiysk from September 9 to October 4.

The matches from round one to round six consist of two classical games each before a four-game final.

As part of the fourth round, Vietnamese grand master Liem and Aronian of Armenia drew in their two classical games and had to play two rapid games to decide the winner.

However, as they continued to draw in the extra matches, the two had to enter the decisive two-game tiebreaker, where Liem was beaten as he failed to keep his focus till the end.

Aronian beat 28-year-old Liem after 56 moves in first game of the tiebreaker, and tied the Vietnamese after 50 moves in the final game, to win the match with 3.5 - 2.5 score on aggregate.

The Armenian was ranked number two in the world and had an Elo rating of 2830 on the March 2014 FIDE rating list, making him the fourth highest rated player in history. He also won the 2017 FIDE World Cup.

Liem is the current Asian champion, with a peak Elo rating of 2739 scored in August 2017.

Liem beat defending European champion Vladislav Artemiev of Russia 3.5 - 2.5 on aggregate in the third round of the tournament on September 19 to advance to the fourth stage.

As a fourth-round contender, the Vietnamese grand master left the championship with an US$25,000 award despite his early elimination.

The finalists of the tournament will qualify for the Candidates Tournament for the World Chess Championship 2020, and will get an award of $110,000 from a total prize fund of $1.6 million.