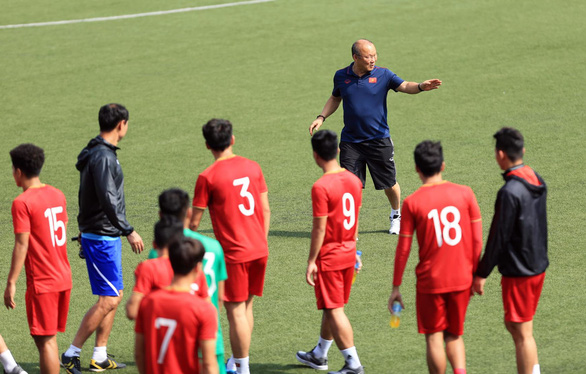 Vietnam are in careful preparation for Saturday's semifinal match against Cambodia in men’s football at the ongoing 30th Southeast Asian (SEA) Games in the Philippines, as coach Park Hang Seo has braced his team for a "tough" game against the junior Angkor Warriors.

Vietnam held Thailand to a 2-2 draw on Thursday while Cambodia defeated Malaysia 3-1 on Wednesday to finish their group stage as Group B’s leaders and Group A’s runners-up, respectively, and advance to the semifinal round.

The game will take place at Rizal Memorial Stadium in the Filipino capital of Manila at 7:00 pm (Vietnam time) on Saturday and be broadcast live on national television channel VTV6.

Speaking at a pre-match press conference on Friday, Vietnam’s head coach Park Hang Seo showed both caution against the Cambodia U22s and determination for a berth in the final.

Park considered the junior Angkor Warriors a “phenomenon” at this year’s SEA Games over whom his team will have to try their best to claim a victory.

“It will be a tough game […] for which we need to prepare carefully in terms of both tactics and spirit,” the 60-year-old South Korean man said.

Park added that his team have watched footage of the Cambodia U22s’ matches to study their strategy.

In response, his counterpart Felix Dalmas showed respect to the Vietnam U22s, but emphasized that the young Cambodians are ready to make a “surprise.”

“The Vietnam U22s are a challenge for us as they are a strong team, but I hope we can show our will before them,” Dalmas told Friday’s press conference.

In the other semifinal game preceding the Vietnam-Cambodia clash on the same day, Group A's leaders Myanmar will face Group B's runners-up Indonesia.

Vietnam have been striving for a SEA Games gold medal in men’s football since 1975.

The first edition of the event was held in 1959.

It has since grown to be one of the region’s largest sporting events, hosting athletes from the 11 countries that make up Southeast Asia.

This year’s SEA Games, the event’s 30th installment, are hosted by the Philippines from November 30 to December 11, with athletes competing in 530 events across 56 sports.