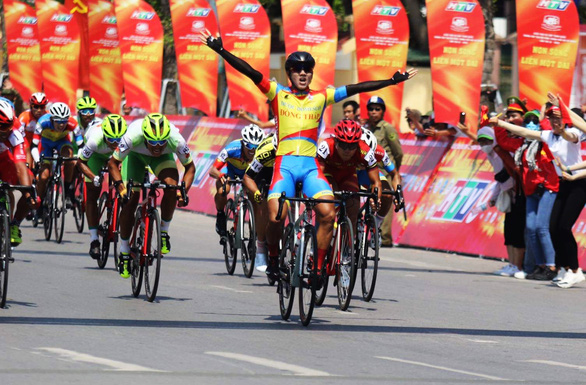 A long-standing cycling race in Vietnam has taken center stage in international media as the first bike competition to be organized since novel coronavirus disease (COVID-19) became a global pandemic.

This year’s 32nd edition of the annual HTV Cup, the most famous stage race in the Southeast Asian country, was scheduled to take place in April but it was then postponed due to COVID-19.

The race is not included in the calendar of the Union Cycliste Internationale (UCI), the world's cycling governing body, which has been suspended until July 1.

As all cycling races are still put on hold around the world because of the coronavirus pandemic, the HTV Cup finished its first stage on Tuesday.

“The twelve strongest teams in the country compete in this race that consists of 18 stages covering more than 2,100km,” Nguyen Dinh Khoi, chief of the executive board of the race, told Tuoi Tre (Youth) newspaper.

News outlets like Cyclingnews.com, Eurosport, Cyclingweekly.com, and Marca have covered the HTV Cup over the past few days, Khoi said.

A member of the Tour de France race and journalists from Germany, the UK, and the Czech Republic have also contacted the organizing board for informtion on the HTV Cup, he added.

“The international media and sport community have paid a lot of attention to this year’s race because it is the first cycling event to be organized after COVID-19,” said Le Van Phu, head of the sports department at Ho Chi Minh City Television, which is the organizer of the HTV Cup.

“UCI also appreaciates this race. Everyone will look at Vietnam in awe as we have basically pushed back the epidemic and now hold a sports event, against the context of many other countries still struggling with the novel coronavirus.

“This is an opportunity for us to introduce Vietnam to the world.”

Race professionalism and quality TV are the top priorities so a beautiful Vietnam will be seen by people around the globe, Phu underlined.

The race’s 18 stages will be broadcast live on conventional TV, Facebook, YouTube, and smartphone apps every day between May 19 and June 7.

Cyclists will race through different types of terrain, including mountain passes, from the north-central province of Nghe An down to Ho Chi Minh City in the southern part of the country.

Vietnam has reported 324 COVID-19 patients as of Tuesday evening, without a single death, in a nation of over 96 million people.

The Southeast Asian country has documented no locally-transmitted cases for a month.

The government has reopened the economy and lifted the majority of restrictions as a result.