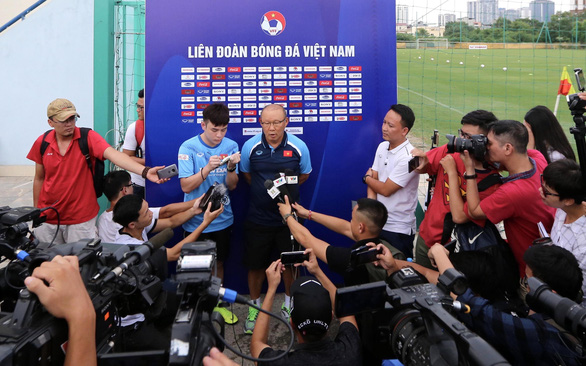 Vietnam’s football head coach Park Hang Seo is worried that the country’s under-22 hopefuls are having little opportunity of game time at the national leading football tournaments, which could hinder the team's ability to defend their gold medal at the 2021 Southeast Asian (SEA) Games.

Speaking to the media on Thursday afternoon, Park, who leads both the national team and the U22 squad, said Vietnam football is in thirst for talents such as Nguyen Cong Phuong, Luong Xuan Truong and Do Duy Manh – footballers of the generation that contributed to Vietnam’s success in many tournaments over the past few years.

Although there is more than one year until the 2021 SEA Games, Park said he has begun selecting and training U22 footballers to compete in the men’s football category.

According to the South Korean manager, clubs that compete in Vietnam's domestic leagues now sign with too many foreign players while young Vietnamese players do not have enough opportunity to hone their skills and build up experience.

After seven rounds, or 49 matches, of the 2020 season of Vietnam’s top-flight professional football tournament V-League 1, only 25 under-21 players from 11 clubs have been fielded, as observed by the news site VnExpress.

Three clubs, namely Ho Chi Minh City FC, Saigon FC and SHB Da Nang, have not used any U21 players this season, according to VnExpress.

U21 players are hopefuls for the U22 team.

“The U22 [team] do not have new talents because young players don’t have the opportunity to play [in domestic tournaments],” Park told the media on Thursday.

He expects that football clubs competing at Vietnamese tournaments will let young footballers hit the pitch more to gain more experience, and so affording him the chance to observe and choose the most talented among them for his teams.

Meanwhile, VFF standing deputy chairman Tran Quoc Tuan said Vietnam’s U21 team, with their core being made up of U22 hopefuls to be called up from now until the year-end, will participate in the Maurice Toulon Revello 2020 international friendly tournament in France if conditions allow.

The Maurice Toulon Revello 2020 is scheduled to take place in December and feature eight nations from four football federations in the world, including such strong teams as Japan, England, and Mexico.

Insiders believe this will be a good chance for young Vietnamese footballers to learn and expose more to international competition.

Vietnam won the gold medal in men's football at the 2019 SEA Games in the Philippines, their first in 60 years.

Next year’s SEA Games is set to be organized in Vietnam from November 21 to December 2 and will feature some 36 to 40 sports, mainly those played at the Olympic Games.

This will be the second time which Vietnam has hosted the SEA Games since 2003.

Eleven participating Southeast Asian countries will send U22 players to compete in the men’s football event of the 2021 SEA Games, with two overage footballers allowed on each 20-member team.

The V-League 1 is the top professional football league in Vietnam, and it is controlled by the Vietnam Professional Football Joint Stock Company.

It is contested by 14 clubs who play one another on a home and away basis.

The team finishing at the top at the end of the season are crowned champions and will qualify for the Asian Football Confederation (AFC) Champions League group stage.