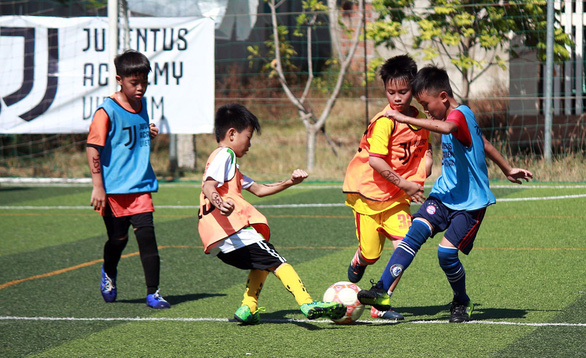 The lack of a regulated process to recruit young talent has caused football academies in Vietnam to step on each other’s toes, obstructing their training and development.

Several football academies have complained that they find it difficult to scout for talents in localities other than their home soil as they face local authorities’ disapproval.

In June, the Juventus Academy Vietnam, based in southern Ba Ria-Vung Tau Province, was barred from organizing its recruitment event in the north-central province of Ha Tinh.

“We had no problem organizing the first recruitment in Ha Tinh in 2018,” said a representative of the academy.

According to the representative, the June event was vetoed as the province said it had already collaborated with another football training center, which was later confirmed to be the Promotion Fund of Vietnamese Football Talents (PVF), owned by Vietnamese conglomerate Vingroup.

The Juventus Vietnam Football Academy faced the same issue with another planned event in the north-central province of Quang Tri.

“They’re afraid that we would recruit all young, quality footballers so they interfered with our event via the provincial sports department,” the representative said.

“Localities preventing football training centers from other places from recruiting [local talents] will limit the development of young players,” the representative complained.

Even when the academy managed to hold a recruitment in another adjacent locale, the coaches told their players not to come to the event, Minh said.

As a result, the Hoang Anh Gia Lai JMG Football Academy now only hosts recruitment events on their home soil in Pleiku, the capital city of the Central Highlands province of Gia Lai.

According to football expert Doan Minh Xuong, football academies and training centers have the right to go to localities other than their hometown to look for young talents.

“So is it legal for these places to refuse to let them in?” Xuong questioned.

Xuong suggested the Ministry of Culture, Sports, and Tourism and the General Department of Sports and Physical Training consider developing a legal framework for the recruitment of young talents in football and other sports.