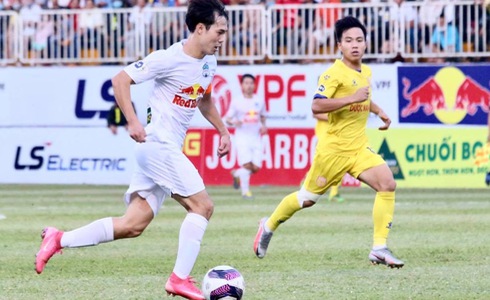 Hosts HAGL appeared to have an easy game in the ninth round of the league at crowded Pleiku Stadium in Gia Lai Province after half an hour but everything turned rough for them in the second half.

Star striker Nguyen Cong Phuong opened the scoring just seven minutes into the game, quickly kicking the ball into the net following a cross from Vu Van Thanh on the right.

Two minutes later, Tran Minh Vuong volleyed home from outside the box to double the lead.

Toan stepped up to convert in the 28th minute, exciting the home crowd at the 13,000-seat stadium.

HAGL then paid the price for their slowdown and seeming complacency given the wide gap.

Hoang Xuan Tan shortened the difference on 41 minutes before Rodrigo Dias netted from the penalty spot in the 64th minute.

Nam Dinh went on to shock the hosts as Doan Thanh Truong leveled the game from close range in the 90+3rd minute, right after their defender Lam Quang Anh was sent off two minutes earlier.

But the game went wild until the very last moment.

The referee pointed to the spot for the third time in the 90+6th minute following Wesley’s handball.

Nguyen Cong Phuong finished his brace from the penalty kick to earn his team three points and solidify their V-League 1 stop spot.

HAGL have garnered 22 points from nine games, followed by Viettel FC with 19 and Than Quang Ninh FC with 18.

Highlights of the Hoang Anh Gia Lai FC - Duoc Nam Ha Nam Dinh FC game in the ninth round of the V-League 1 on April 12, 2021