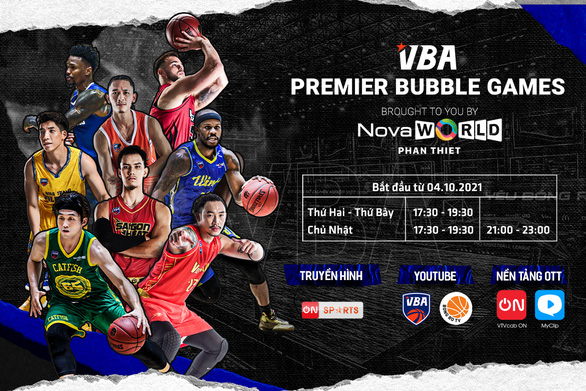 The organizers of the Vietnam Professional Basketball League (VBA) on Saturday officially changed its brand identity and announced NovaWorld Phan Thiet as the new title sponsor, who will finance the broadcast of the tournament’s freshly-formatted series.

The series of games, which will be organized in a centralized, isolated, and no-spectator format, is now officially called the VBA Premier Bubble Games - Brought to you by NovaWorld Phan Thiet.

The organizers have mapped out a development orientation for the VBA to become a professional tournament that not only meets international standards but also helps build and promote the basketball culture in the Vietnamese community, as well as contributing to making Vietnam known in the world’s basketball map.

Although the COVID-19 pandemic affected the initial plan of this season’s tournament, the VBA successfully switched to the centralized, isolated, and no-spectator format, with games taking places behind closed doors in only one locality, which is different from the previous decentralized, spectator-packed versions.

Seeing eye to eye with the organizers on the VBA’s community-oriented development, the NovaWorld Phan Thiet brand developed by Vietnamese real estate group Novaland agreed to become the title sponsor of the league.

The new title sponsor will fund not only the broadcast of the newly-formatted VBA games in the 2021 season but also all related activities, which are expected to run through June 2022, including the VBA3x3 and D-League basketball tournaments, the support for the Vietnamese national basketball team ahead of the 2021 Southeast Asian Games, and other basketball community-driven campaigns.

On this occasion, the organizers also introduced this year’s new logo of the VBA, which exhibits a dynamic and strong style while retaining the tournament’s own identity and character.

In particular, the borderless logo is meant to represent the unlimited creativity and breakthrough of both the tournament and the title sponsor’s brands.

“Accompanying with the VBA give us more motivation to soon achieve our goal of becoming a destination for tourists, local people, and international sports enthusiasts,” said a Novaland representative.

The representative also hailed the VBA’s new format as a demonstration of the Vietnamese sportsmanship.

“It really is a valuable source of energy for the VBA in particular and the Vietnamese basketball sector in general to continue its journey and prepare for a strong comeback in the future,” Sa said.

“We expect that this cooperation will bring about practical results, with the first goal being providing sports fans with righteous and quality entertainment content through the newly-formatted VBA games,” the CEO added.

“We hope this can be a ‘spiritual [COVID-19] vaccine’ for everyone.”

The VBA Premier Bubble Games - Brought to you by NovaWorld Phan Thiet will be broadcast on On Sports channel and the two over-the-top media services VTVcab On and Myclip, starting October 4.

The organizers hope the VBA content will serve as a ‘spiritual vaccine’ to help sports fans mitigate the negative effects of the pandemic on their mental health.