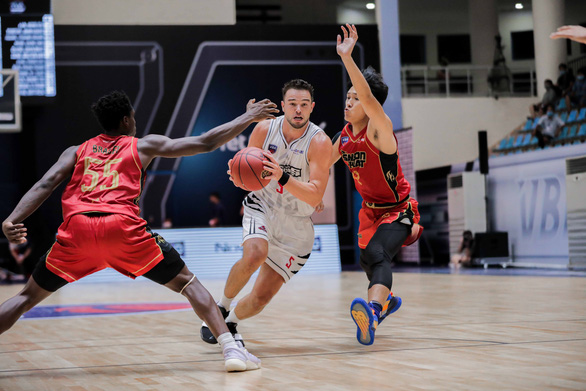 Jordan Young’s three-pointer got Thang Long Warriors off on the right foot shortly after the referee’s starting whistle.

The Saigon Heat responded with Daquan Bracey and Anthony Sundberg’s consecutive three-pointers before the game turned tit for tat.

At the end of the first quarter, the two sides were neck and neck at 25-23 in favor of the Thang Long Warriors.

Six minutes into the second quarter, Bracey and Sundberg helped the Heat sink a series of shots that pushed them ahead to a 36-32 lead.

However, the tables were turned once again when Warriors teammates Timothy Guers and Gang Thai Hung help Thang Long push back ahead to a 48-45 lead by half-time.

Standing at 2.06 meters tall, Thang Long’s Coleman used his height to help the Warriors rack up 13 more points in the third quarter, sending his team into the fourth with a 74-63 lead.

The Warriors’ Truong Hoang Trung hit the first basket in the final quarter.

Vo Kim Ban and Sundberg tried to bite back with four three-pointers, but their efforts were not enough for Heat coach Matt Van Pelt and his team to avoid their first loss of the season.

For the Warriors, the 94-81 victory was redemption for their loss to the Heat in last year’s VBA finals.

Although Bracey scored 39 points in the team’s fifth game of the season, Guers was voted the match's MVP thanks to his 17 points, ten rebounds, and 11 assists.

The VBA Premier Bubble Games - Brought to you by NovaWorld Phan Thiet has been broadcast on OnSports channel and two over-the-top media services, VTVcab On and Myclip, since October 4.