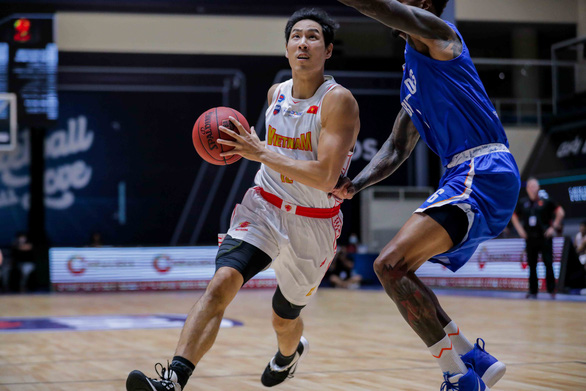 The absence of two key players and contributors to Vietnam’s two bronze medals at the 2019 Southeast Asian (SEA) Games was to blame for the Vietnamese national basketball team’s recent defeat at the VBA Premier Bubble Games - Brought to you by NovaWorld Phan Thiet.

2021 marks the debut of the Vietnamese national basketball team as the eighth contender at the VBA.

This year, however, only three of the four players who helped Vietnamese basketball make a name two years ago are still with the team as Dierker already retired.

Replacing Dierker is Richard Nguyen, a Vietnamese-born defender returning from the U.S., who was among the squad that took Saigon Heat to the VBA championship in the 2019 season.

Although Nguyen is not as tall as a traditional center, he possesses high speed and physical strength and is active at both ends of the court.

While Dierker’s absence was not expected to be an issue for coach Kevin Yurkus’ star-studded squad, Khoa Tran, another defender on the team, has not hit the court in any of their games, including Game 12, despite being registered.

Khoa Tran’s absence caused the Vietnamese national basketball team to fail to properly control the rhythm of the game.

As Young had to take on the absentee’s work, he encountered a lot of difficulties.

Besides, the declining performance of Tam Dinh, a star player - who was the highest scoring player for five seasons in the VBA, also made the attack plan of the national team ineffective.

Meanwhile, coach Yurkus’ second formation, which includes such proficient Vietnamese players as 2.03-meter-tall Nguyen Huynh Phu Vinh, Du Minh An, Huynh Thanh Tam, and Le Ngoc Tu, struggles to mark the trios from other teams as the trend in this year’s VBA season seems to be widespread dependence on two foreign players and one Vietnamese for both defense and offense.

No pain, no gain

In addition to the incomplete team, experts believed that the two defeats of the Vietnamese national basketball team in Game 8 and Game 12 were within the plan of coach Yurkus as he did not set victory as the top goal but wanted his players to accumulate experience.

On the other hand, he looked to preserve the physical conditions of the squad and not to let the players get injured as the 2021 SEA Games hosted by Vietnam draws near.

Yurkus’ intention can be observed in the decisive fourth quarter of every game, when he often withdraws the first team from the court and lets the second formation play.

Such massive substitution created chances for their rivals to widen the gap by 20 to 40 points.

The experts believed that Yurkus adopted the right approach as the ultimate goal of the Vietnamese national basketball team is not to win the VBA experimental series, but to clinch gold or silver medals at the 2021 SEA Games.

Game 12 of the VBA Premier Bubble Games - Brought to you by NovaWorld Phan Thiet ended with a dreadful defeat for the Vietnamese national basketball team against Hanoi Buffaloes.

The Vietnamese team actively staged zone defense play to take control inside the three-point line in order to limit attacks from Moody, a new player of Hanoi Buffaloes.

Out of coach Yurkus’ foresight, the Buffaloes players attacked from outside the three-point line.

Hanoi Buffaloes also set a record with 17 three-pointers scored in a game.

At the end of regulation, the Hanoi-based team routed the Vietnamese national basketball team 96-54.

Vietnam will have three games to play