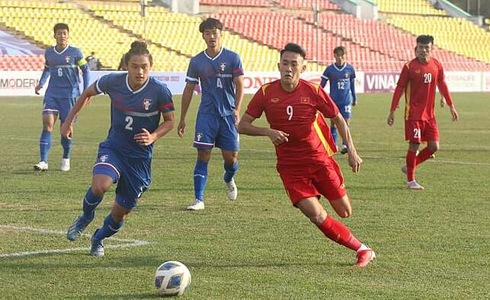 Vietnam delivered an 1-0 victory over Taiwan in the Group I opener at the 2022 AFC U23 Asian Cup qualifiers in Kyrgyzstan on Wednesday, an important win on the team’s path to the finals.

Vietnam's head coach Park Hang Seo kept three defenders at the back throughout the match while using the rest of his players to put serious pressure on Taiwan.

Vietnamese striker Tran Van Dat barely missed the goal with a remarkable header in the ninth minute, and Taiwan answered with a few near misses about midway through the first half of play.

At half-time, the teams were still tied 0-0.

Coach Park sent four substitutes in for the second half, including midfielder Nguyen Hai Long, who helped Vietnam’s offense keep up its pressure on Taiwan.

It was not until the 82nd minute that Long assisted Le Van Xuan, who sent the ball flying past stunned Taiwanese keeper Li Guan-Pei, marking Vietnam’s first and only goal in the match.

Taiwan’s Cheng Chih-Huan was shown a red card following his foul on Dat in the 85th minute, putting the East Asian team at a serious disadvantage for the remainder.

The victory brought Vietnam one step closer toward winning Group I and securing an official ticket to the final tournament.

The Golden Stars' next match is against Myanmar on November 2.

Forty-two teams were drawn into nine groups of four and two groups of three teams, including Vietnam’s Group I.

A total of 16 teams will qualify for the final tournament, including hosts Uzbekistan, eleven group winners and the four best runners-up.