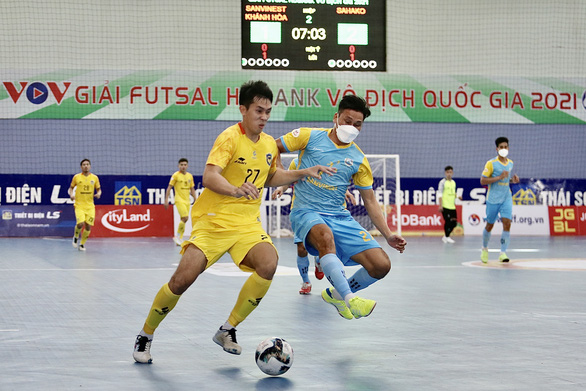 In Vietnam, futsal team play with masks on

Sanvinest Khanh Hoa played their Round 13 game at the Futsal HDBank National Championship 2021 on Monday against Sahako, during which a new addition to their uniforms was made -- face masks -- for the players not just on the sidelines, but on the court.

Since Sahako had had their two latest games postponed following the detection of the coronavirus infections in the team, Sanvinest Khanh Hoa were the first squad that agreed to play against them on the court.

Tran Duy Hieu, deputy manager of Sanvinest Khanh Hoa, said that a member of the organizing board of the Futsal HDBank National Championship 2021 had assured him that all of the Sahako players registered for Monday’s game had negative test results.

However, the organizing board member failed to show Hieu those results.

“Our players were worried so we decided to wear face masks to protect ourselves, play the game, and complete our responsibility in the tournament,” Hieu said.

“Wearing face masks on the court is not prohibited according to the tourney’s regulations, so the game was allowed to take place.”

With masks on and the requirement of keeping a certain distance from Sahako players, Sanvinest Khanh Hoa’s members, all of whom had tested negative for the virus, had a poor performance and accepted a 1-3 defeat on Monday afternoon.

The game also caused mixed opinions on the Internet.

A number of people commented that Sanvinest Khanh Hoa should not wear face masks on the court and should have called off the game if they had been afraid of virus transmissions.

The Futsal HDBank National Championship 2021 is the top league for futsal in Vietnam, with participating teams competing in two stages.

The first stage was played by six teams in a round-robin format while the second stage includes the four winners in the first stage and the top six teams from last year’s edition.

Before Monday’s game, Sahako, based in District 3, Ho Chi Minh City was on top of the ranking table while Sanvinest Khanh Hoa, hailing from the south-central province of Khanh Hoa, ranked fourth.

Ho Chi Minh City has been the biggest epicenter in the country since the fourth outbreak began on April 27, with nearly 458,000 local cases and around 17,300 deaths.

The central government has relaxed pandemic control curbs over the past few weeks as transmissions have slowed down, due in part to larger vaccine coverage.

The city of about nine million people had administered over 13.9 million vaccine doses as of Monday afternoon, with more than six million people fully inoculated.

However, the number of infections has appeared to rebound in recent days.

Meanwhile, Khanh Hoa has recorded 11,463 coronavirus infections and 96 deaths in this bout, according to a tally by news site VnExpress.

With a population of 1.2 million people, the province has administered the first doses of vaccine to more than 978,000 people and the second shots to over 8885,000 others, according to the national COVID-19 vaccination portal. 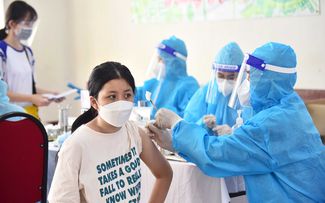