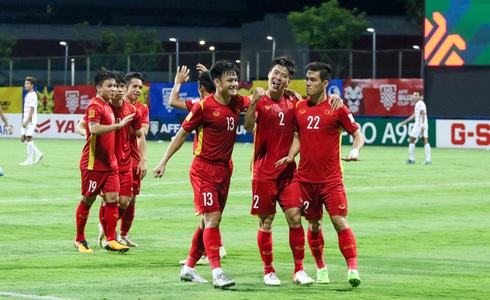 Reigning champions Vietnam will encounter archrivals Thailand in the semifinals of the AFF Suzuki Cup 2020 as Group B runners-up after beating Cambodia 4-0 at Bishan Stadium in Singapore on Sunday night.

The Vietnamese, who ranked second in Group B with seven points like Indonesia but scored less goals before Sunday night’s game, needed only a draw to enter the semifinals while Cambodia were already eliminated.

From a counter-attack, Nguyen Tien Linh found a through pass and broke the offside trap to face Cambodian keeper Kimhuy Hul.

The striker showed his composure with a clinical finish to score the opener for Vietnam right in the third minute.

Cambodia responded with a shot from the right flank but it caused no trouble for Vietnamese goalkeeper Bui Tan Truong, who easily caught it.

It was Linh again who doubled Vietnam’s lead in the 27th minute with a stunner from outside the box that left the Cambodian goalie with no chance.

Vietnam pushed early for a third goal right after the break, and their dominance was soon rewarded.

Nguyen Quang Hai made a key pass for Ho Tan Tai, who crossed the ball for defender Bui Tien Dung to head in for the Golden Stars in the 56th minute.

Nguyen Hoang Duc stole the ball in Cambodia’s half and passed it to Hai, who sprinted down the right flank and fired home just one minute later to temporarily send his team to the top of Group B.

After the fourth goal, Vietnam slowed down the tempo and switched to counter-attacking play to save stamina.

A strike from Chan Vathanaka forced Tan Truong to make a save on the hour mark, but there was still no goal for Cambodia.

A superior possession rate was all that Cambodia had in the remainder of the second half.

Vietnam ended up second in the ranking of Group B due to an inferior goal difference to Indonesia as the game concluded 4-0 while the Red-White defeated Malaysia 4-1 in the other fixture of the night to top the group.

The Golden Stars will take on Thailand, who are Group A winners, in their two-legged semifinal on December 23 and 26, while the other showdown between Singapore and Indonesia will take place a day earlier.

Title defenders Vietnam, who claimed a 3-2 aggregate triumph over Malaysia in the 2018 AFF Suzuki Cup finale, were randomly selected for Group B alongside Malaysia, Indonesia, Cambodia, and Laos.