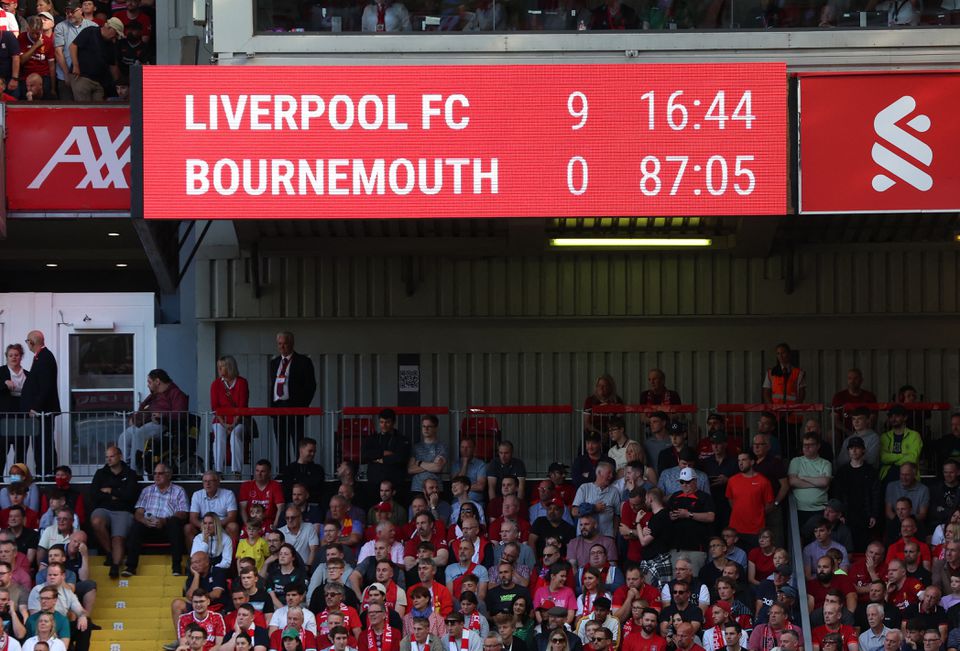 Liverpool earned their first win of the season in stunning fashion after equalling the record for the biggest ever Premier League victory with a 9-0 thrashing of promoted Bournemouth at Anfield on Saturday.

Two goals inside the opening six minutes from Luis Diaz and Harvey Elliot put the hosts into a commanding position from the off.

A stunning strike from England full-back Trent Alexander Arnold which arrowed into the top corner gave Liverpool a three-goal lead in the 28th minute before Roberto Firmino got in on the act with a fourth three minutes later.

Not done there, Liverpool had a fifth before the interval, with Virgil van Dijk heading home from a corner -- the first time the Reds had netted five in the first half of a league game since 1958.

Chris Mepham's own goal had the visitors staring at the prospect of an embarrassing drubbing, with such worries heightening after a close-range finish from Firmino and substitute Fabio Carvalho's volley.

After Diaz headed in the ninth, Liverpool had five minutes to become the first side to score 10 goals in a Premier League match. But despite some late scares, Bournemouth did just enough to avoid suffering that ignominy.

Following Manchester United (twice) and Leicester City, it was the fourth time a team has recorded a 9-0 win in a Premier League match.

"We had to prove a point to ourselves," Liverpool coach Juergen Klopp said as he celebrated the biggest ever competitive win of his managerial career.

"We were not happy with how we played so far this season, but we had good moments in those games.

"We just had to give the game a proper direction and that's why I loved the start today. Two wonderful goals, everything about them.

"We kept going, scoring different goals but with the same purpose to keep up the pressure. In the end it was the perfect football afternoon."

The last time Liverpool failed to win any of their opening four games of a season was back in 2012-13, a feat never likely to be repeated once Diaz's third-minute header on the end of Mohamed Salah's cross had found the net.

It was the first time in eight league games that Liverpool scored first, and before long the hosts added a second in the Merseyside sunshine as young Elliot rifled home from the edge of the penalty area.

A third was quickly forthcoming, and worth the wait for an expectant Anfield, with Alexander-Arnold firing an unstoppable strike into the net, while there was more than an element of fortune about Liverpool's fourth finished off by Firmino.

In finding the net, the Brazilian became the first Liverpool player to be involved in four goals - three assists and a goal - in the Premier League.

Van Dijk's header meant it was going to be a long second half for the visitors, with the feeling of dread even more prevalent after Mepham's own goal just after the break made it six.

A poor parry from Bournemouth goalkeeper Mark Travers was then punished by Firmino, before Carvalho and Diaz again had supporters calling for 10, with Bournemouth looking decidedly panicked, but it was not to be.

Bournemouth have now conceded more goals (16) in their first four games of a Premier League season than any other side in the competition's history.

"It was a humbling experience what has happened today," Bournemouth coach Scott Parker said.

"We need to make a decision (in the transfer market) and give these players a break. They are struggling for air."