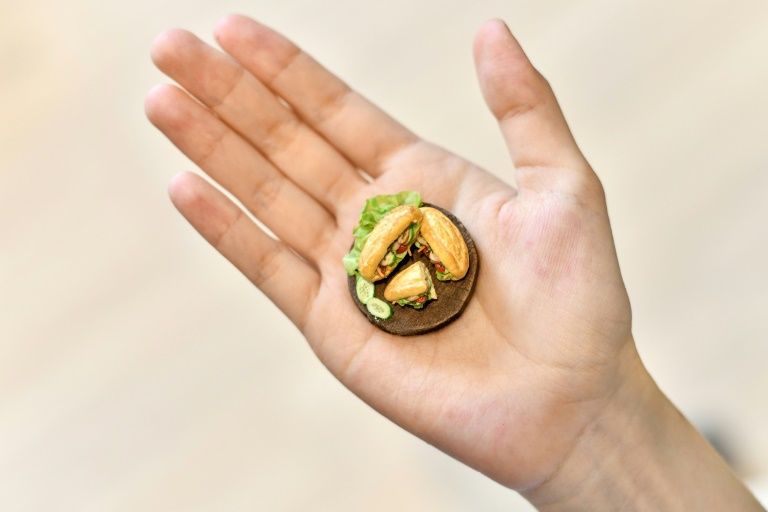 Squinting in concentration, Vietnamese artist Nguyen Thi Ha An drops a bright red chilli onto a bowl of pho noodles barely bigger than a coin -- the finishing touch to a miniature clay model that has eaten up days of her time.

An -- a 28-year-old architecture graduate -- began crafting food miniatures a year ago, spotting a chance to capitalize on the world's growing love of Vietnamese cuisine.

"Each Vietnamese dish has its specific beauty," she says, using tweezers to softly lay a scallion beside a "banh mi" sandwich.

"I want the models to help people see that."

Less globally well-known dishes such as sweet rice dessert "che com" are also on the menu at An's Hanoi studio.

But the classics get plenty of attention, with An modelling tiny bottles of chilli sauce and pickled garlic to accompany her bowls of pho.

"Each model comes with its own difficulty," she tells AFP.

"The bowls have to be very clean and neat, while we must show the lines on a scallion to convey its texture."

An's assistant, 21-year-old Nguyen Ngan Ha, agrees their work must be "meticulous at every stage".

"People must be able to believe this is real food," she says.

Ninety percent clay and 10 percent liquid plastic, the models can take up to five days each to make, and An sells them for up to $80.

She also plans to expand the business to beverages -- including Vietnamese coffee and beer -- as they are served at a traditional open-air "bia hoi" bar.

And although she has given up a potentially more stable career in architecture to pursue this niche craft, she believes she made the right choice.

"I really want to make my work the best that it can be," she says.

"And I want to help more people see the beauty of Vietnamese culture."