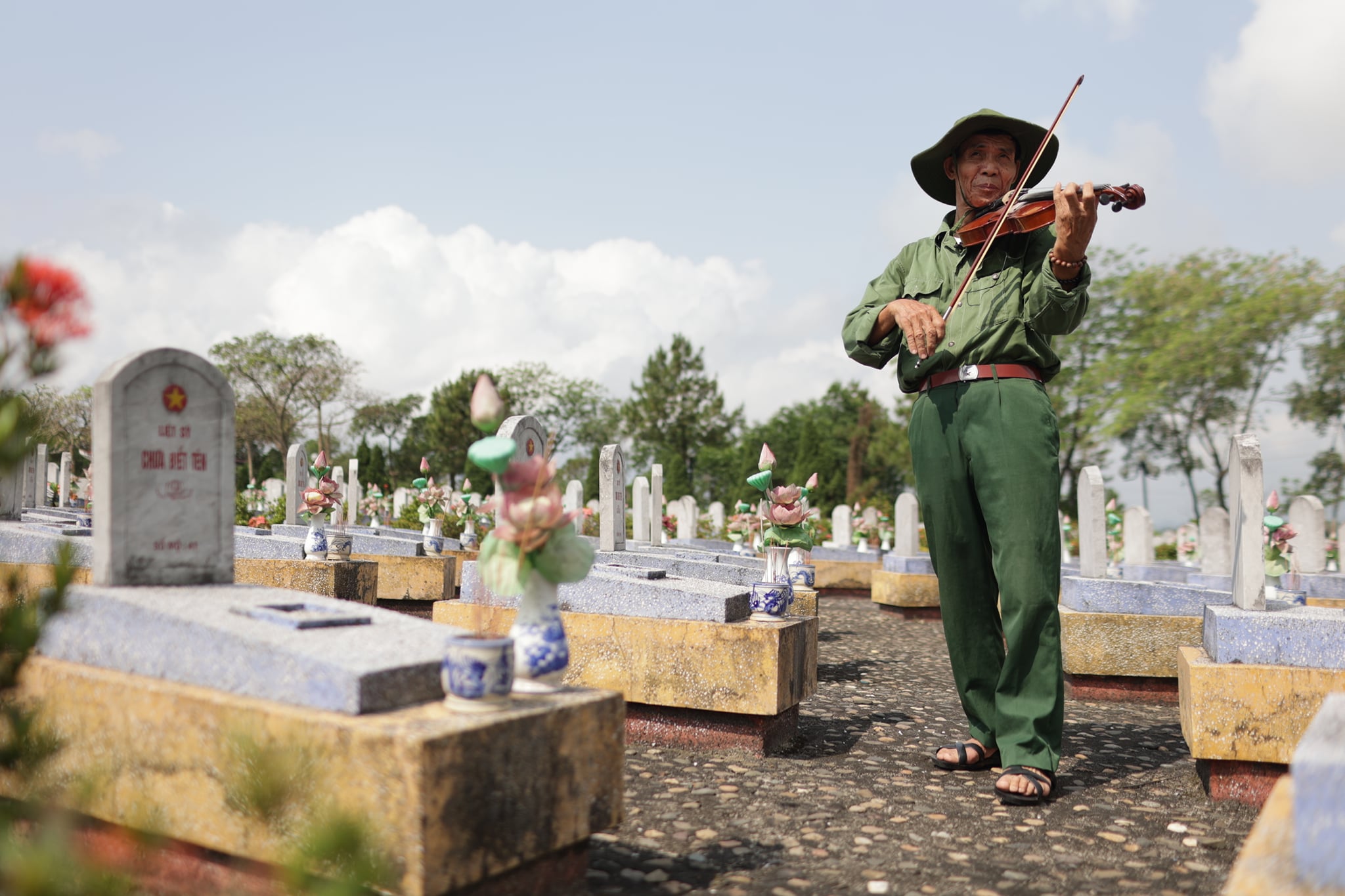 It was a sunny day in early April when Chu Dinh Hoa, 71, visited Truong Son National Martyrs' Cemetery in Quang Tri Province, central Vietnam, where he played violin to pay tribute to the fallen soldiers.

“I want to say thanks to those who sacrificed for our homeland,” Hoa explained why he played the song 'Homeland.'

After seven years serving in the military, Hoa was demobilized in 1978.

He moved to the southern province of Binh Phuoc where he ran a farm for over 20 years before returning to his hometown in north-central Nghe An Province.

In his seventies, Hoa had always dreamed of visiting Truong Son Cemetery, National Road 9 Martyrs' Cemetery in Quang Tri, and other places where he carried memories of the war.

In April this year, that dream suddenly came true thanks to Hoang Tien Dat, a young neighbor from Nghe An.

Despite their age gap, the two had been friends for years before Dat found out Hoa was one of his late grandfather’s close friends.

Knowing Hoa and his grandfather used to talk about visiting the southern region together but could not make it, Dat felt urged to do something.

“Recently I’ve learned that Hoa is very passionate about music and always wished to come to the Central Highlands region to see people playing T’rung [a traditional bamboo xylophone used by ethnic people]. Also, the story of him and my grandfather encouraged me to organize a trip for him,” Dat told Tuoi Tre News.

It was a win-win situation for Dat, who was working for a newspaper in Hanoi, as he also prepared some stories to work on the road.

The duo departed from Nghe An, traveled along central coastal roads to the southern province of Vung Tau, then visited Cu Chi Tunnels in Ho Chi Minh City before heading to the Central Highlands and returning home.

After 25 days, Dat and Hoa traveled nearly 4,000km by car through 20 cities and provinces.

When Dat took the wheel, Hoa cheered up the atmosphere with his singing.

“He wanted to visit places like the old battlefields, martyrs’ cemeteries, museums, and pagodas which are more peaceful than famous tourist destinations, so I set up my plan to take him to historic sites,” Dat shared.

The two men on the road even made headlines on local social media after Dat shared the experience on a Facebook group of travel enthusiasts in Vietnam.

Many people had hit the 'love' button and expressed their respect for the two as well as their interesting relationship which led to a 'strange' journey: a young man traveling through half of Vietnam with his grandpa’s friend.

People also adored Dat for his time and effort to help Hoa have the trip of his life.

However, Dat was not flattered, calling what he did just 'a normal thing.'

But to Hoa, the trip was something that would make him smile whenever he thinks of it.

“I’m really happy that Dat could take me on such a trip at such an old age,” he said.

“All the places I visited reminded me of a lot of things.

“I told Dat it’s such a great thing to see what older generations left for us, to see our homeland developing rapidly.

“In the past, we had to walk for months to reach the southern region but now we only needed almost two days."

According to Dat, one of his biggest concerns during the trip was Hoa’s health.

However, it turned out that Dat was knocked out by the road and weather while Hoa stayed healthy during the whole trip.

“I only worried about him getting tired because he had to drive the whole time,” Hoa said.

Another dream of Hoa

Besides the desire to visit the old places, one motivation for Hoa to be on the road was his wish to see people playing T’rung.

After performing music while serving in the army, Hoa developed a strong passion for it.

He said the April trip gave him many opportunities to meet and exchange with people who shared his passion.

Hoa has been into creating musical instruments from daily items such as cooking pots, bricks, light bulbs, beer bottles, kettles, and more.

An 'invention' he has been most proud of is an instrument called 'Sao Tu Tam,' which means 'a flute made from the heart.'

During his years in war, Hoa witnessed his comrades being injured by bombs and bullets many times.

After the war, he continued to see civilians become disabled by remnants of explosives and toxic chemicals.

All prompted him to do something to bring joy to those people.

It took Hoa more than 10 years to bring his idea of disability-friendly musical instruments to life.

'Sao Tu Tam' is a set of metal pipes combined with no holes like a regular flute.

The instrument is designed with a strap system for people with disabilities to easily carry on their body.

Hoa knows his instrument is not good-looking, but all he wants is to cheer up disabled people.

“I only want to have the opportunity to teach disabled people at some shelters to play my instruments so that they can feel a little joy in life,” Hoa said.

“If it works, maybe they can find a way to earn a living with that.

A video shows Hoa playing a disability-friendly musical instrument he created for people with disabilities at his house in May 2021.