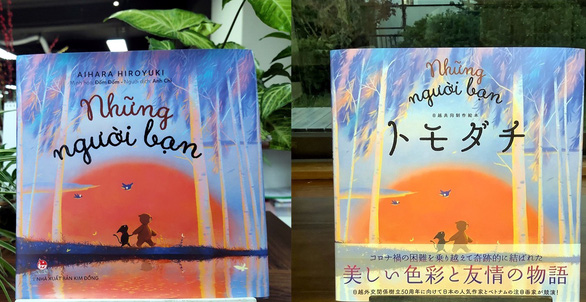 The collaboration between Japanese writer Aihara Hiroyuki and Vietnamese illustrator Vu Thuy Ngoc Ha, whose pen name is Dom Dom, materialized when the famous Japanese author suggested having the Vietnamese partner feature in the ‘Friends’ comics.

The copyright for the original version had been purchased by Vietnam’s Kim Dong Publishing House.

Dom Dom was then tasked with drawing illustrations for the Vietnamese version, which was released in Vietnam last year.

Given the book’s highly educational values, Hiroyuki cherished his wish for publishing it with the Vietnamese artist’s illustrations in Japan right after receiving the Vietnamese version of ‘Friends’.

Until now his dream has come true when the release with Japanese discourse and paintings by Dom Dom has been introduced in Japan by Sunny Side Publishing House, keeping the same cover template of the Vietnamese version.

The original combination of Japan’s content and Vietnam's visual is meant to bring out the beauty of daily stories in a familiar look, presenting lively drawings and poetic images, to Vietnamese readers.

The children’s book ‘Friends’ tells the story about Brown Bear, a big yet shy teddy bear, that is lost after a picnic with his owner’s family and the helpful Mun Cat who happens to show up and awaken Brown Bear’s bravery and warm heart while he is left alone in a completely unfamiliar place.

The story characterizes the calm Brown Bear and the brave Mun Cat, while narrating how their warm friendship was struck up on a journey during which they earn each other’s trust from a chance meeting.

The touching story educates children to explore the world of emotions, gain a profound understanding of the value of friendship, and to get to make friends with surrounding people.

In a letter to readers, Hiroyuki spoke highly of Dom Dom, saying the Vietnamese “artist once again revived [his] feelings with her wonderful paintings.”

“I really like her paintings and hope you do too,” he said.

“Have you seen the images of Japanese people embodied in the calm Brown Bear and brave Vietnamese people in Mun Cat?”

By showing the true friendships between the main characters, the Japanese author happily believes that children of the two countries will, over time, build such a close bond, that of ‘Friends.’

The collaboration marks an ‘integration’ event for Vietnam's book publishing industry and an important milestone for the Vietnamese illustrator, in recognition of her long-built and promising career in comic drawings.

Dom Dom won the first prize of the Scholastic Picture Book Award 2019 (SPBA) for her comic book ‘The Girl on the Roof and the Boy on the Beach.’

The book has recently been published in 2021 by Scholastic, a U.S.-based publishing group with over 100 years of experience.

Dom Dom has noticeably provided multiple covers and illustrations published in Vietnam, including ‘Hoang Tu Rom’ (The Straw Prince) in 2017, ‘Ban Tay Cua Bo’ (Father's Hand) in 2017, and ‘Chuyen Nay Chuyen Kia’ (This and That Story) in 2020.