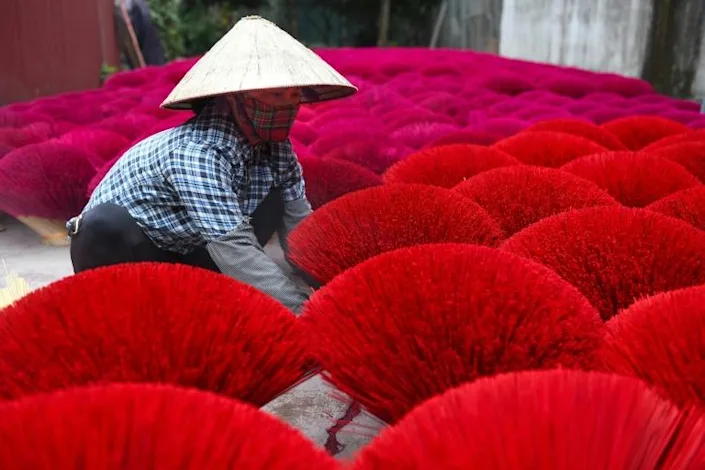 Vietnam's "incense village" is dazzling pink as workers prepare the fragrant sticks for the Lunar New Year holiday, but strict rules to stop the spread of COVID-19 are dulling its lustre.

January is usually the busiest time of year for workers in Quang Phu Cau village on the outskirts of Hanoi, where the tradition of making incense goes back more than a century.

As Vietnam's Tet new-year holiday approaches -- this year it begins on February 1 -- sales tick up with throngs of people crowding into temples to light incense during worship, or burn the sticks on the ancestral altar at home.

But while villagers are busy dyeing, drying and whittling bamboo bark to make the sticks, they complain that business is slow.

"I think our sales must have dropped by 30 percent compared with the same period last year," says Nguyen Thi Luyen, 59.

Vietnam reported economic growth for 2021 of just 2.58 percent -- its lowest in three decades -- as the country endured strict restrictions to fight the pandemic.

Production, supply chains and businesses were seriously hit for at least three months.

Things have started to improve, but the consequences remain.

"Normally, there would be trucks carrying our products from central provinces and border provinces. This year, due to pandemic preventive policy, trucks [could not] carry goods there," Luyen told AFP.

Quang Phu Cau is among several places dotted across Vietnam making the sticks, the scent of each batch carefully tailored to suit the tastes of the regions where they will be sold.

Most households in the village are involved in the ancient trade, from cutting bamboo planks and dipping thin strips into pink dye to coating the dried sticks in an aromatic paste.

"We really hope things will come back to normal soon," Luyen said.