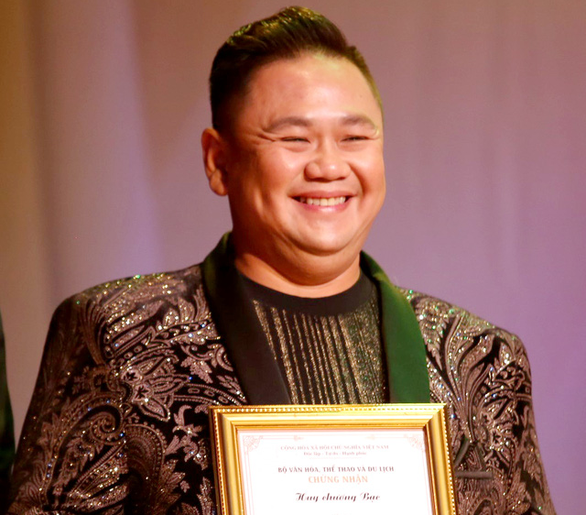 An award granted last week at a national festival to an entertainer who was jailed in the U.S. in 2016 for sexually molesting a minor has caused an emotional uproar across Vietnam.

Many people have expressed their shock and dismay after Hong Quang Minh, aka Minh Beo (or Fat Minh), was presented with a silver medal at the closing ceremony of the 2021 National Drama Festival in Ho Chi Minh City on January 17.

At the event, Minh Beo was honored for his role in a play, ‘Thi The Thu Tu,’ in which he took the starring role of an criminal disguised as a close friend of a policeman's family while evading an international warrant.

In 2016, Minh Beo was sentenced to 18 months in prison in the U.S. for sexually assaulting a young boy and attempting to commit a lewd act upon a fictitious minor.

He was convicted of one felony count of oral copulation of a minor and one felony count of attempting to commit a lewd act upon a child under the age of 14, the Orange County District Attorney in California said in a press release on August 11, 2016.

Minh Beo had been detained since his arrest in late March 2016 after a 16-year-old boy reported being sexually assaulted by him while auditioning for a video project.

The Garden Grove Police Department (GGPD) then had an undercover officer pose as a fictitious teen to communicate with the defendant while the investigation continued.

Minh Beo was quick to set up a meeting with the officer, whom he believed to be a minor, during which he planned to engage in oral copulation.

The defendant was subsequently arrested by GGPD.

In January 2017, Minh Beo was deported back to Ho Chi Minh City from the U.S. after serving half of his 18-month prison term.

At that time, the southern Vietnamese city’s Department of Culture and Sports advised him not to participate in performance activities to avoid public dismay over his crimes.

Recent discussions have shown that members of the Vietnamese public are divided on their opinions on the award presentation, with many opposing Minh Beo’s 2021 accolade due to his past crimes and others supporting the idea that the entertainer should be given a chance to live and work.

Deputy director of the Department of Performing Arts Tran Huong Duong, head of the festival’s organizing committee, said that Minh Beo's company participated in the theater festival with the approval of the Ho Chi Minh City Department of Culture and Sports.

The entertainer’s medal was given by the festival’s jury based on the quality of his work, he added.

"Officially, state agencies do not have any recommendations on artist Minh Beo doing his job,” he said.

“Currently, artist Minh Beo and his company are not breaking any law.

“They were eligible to participate in the festival and it is normal for them to win an award when their work meets certain standards."

He also said that Vietnamese people’s moral tradition leaves an open door for those who have lost their way.

"So why are we pushing an artist who made a mistake to a dead end while he's working hard in order to serve the society?

“Should we choose to rehabilitate a person or corner him to a dead end?”

When asked if honoring Minh Beo ran counter to the recent code of conduct issued by the Ministry of Culture, Sports, and Tourism, Duong said it is only applied to artists who act and speak in violation of the code at present, “except for someone who already completed their legal penalty nearly ten years ago.”

He emphasized that authorities want to focus on how to support artists in doing their jobs after two years of COVID-19, instead of caving in to public outcry.