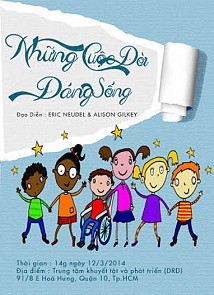 An American documentary on physically challenged people has started to be screened in Ho Chi Minh City, and will continue to be shown there and in Can Tho City until March 20.

The documentary “Lives Worth Living,” the first television chronicle of the history of the American disability rights movement from the post-World War II era until the passage of the Americans with Disabilities Act (ADA) in 1990, was already shown at 2:00 pm this afternoon at Doi Rat Dep (Life Is Beautiful) Club (91/8E Hoa Hung Street, District 10, HCMC).

The screening is part of a chain of Vietnamese-American culture exchange events organized by the U.S. Consulate in HCMC and Vietnam’s Disability Resource and Development (DRD).

Audiences will have a chance to join exchanges with the film’s makers, director Eric Neudel and his wife Alison Gilkey, and representatives of the U.S. Consulate regarding the physically-challenged people and the difficulties they face.

Those interested can send emails to thuongthuong@drdvietnam.com or phone (84-8) 38 68 48 58 (#112) for detailed screening schedules and bookings.

The documentary, broadcast by PBS through U.S.-based ITVS as part of the Independent Lens series, lauds the physically challenged people’s tremendous efforts and iron will to overcome hurdles for a fulfilling life.